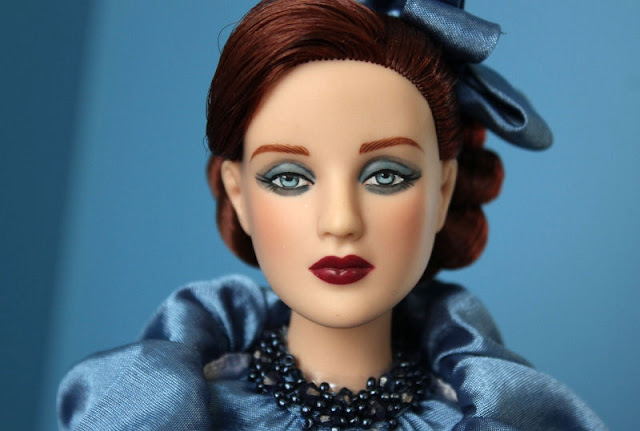 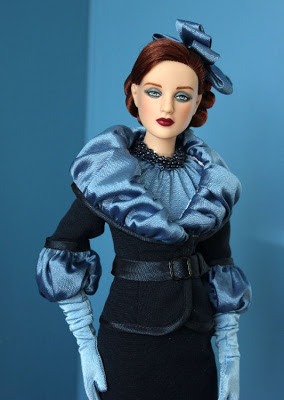 Another Antoinette doll has made it to my house.  It would be silly of me to do a complete review of Tranquil Antoinette since she's an older doll. ... She's from 2010.  I did want to show her off, though.  I got her for a great price, since she'd been sitting on a virtual shelf for the past two years at Two Daydreamers.  Love her!

For some reason it had never occurred to me before to use the blue wall in my husband's computer room as a photography background.  It worked perfectly for these photos.  Awesome.

FYI:  The beading at the neck is actually a part of her blouse, and not a separate necklace.  The blouse under the jacket is sleeveless. 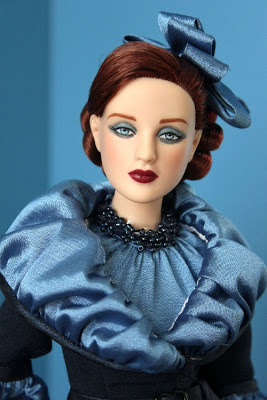 After I took these pictures, I undressed her, terrified there would be staining from the blue clothes.  The Tonner Doll Company had taken some precautions against staining.  Her body was partially wrapped in plastic underneath the clothing, and there was a separate pair of nude pantyhose underneath the navy blue hose.  She still ended up being stained on her feet, although the rest of her managed to escape staining.  Sigh.  Blue splotches on her feet.   I'm not upset, because I expected it with a doll dressed in dark blue.  There should have been plastic wrapping on her feet as well.

I guess I'll try to get the stains off with Remove-Zit or something.

EDIT:  Yes, Remove-Zit worked quite nicely.  I was able to get the stains off her feet and she's perfect now.  Yay!