Review of the Lila doll by Soom 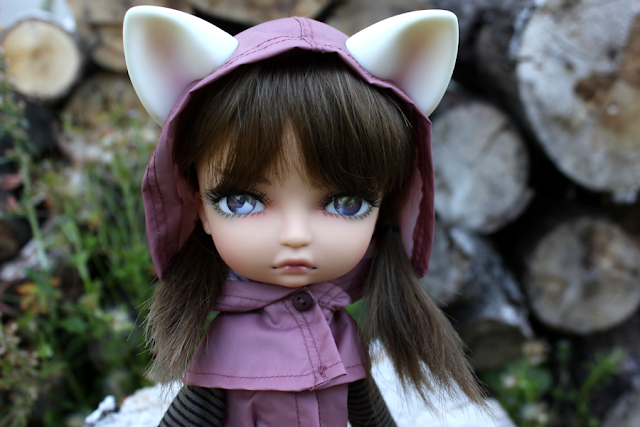 I kept seeing these pouty, melon-headed girls in the pages of doll magazines, and thought they were super interesting. I finally decided I needed one, so I sold one of my older dolls for some guilt-free cash, and thus got the purple-eyed Lila called "A Very Catty Day." 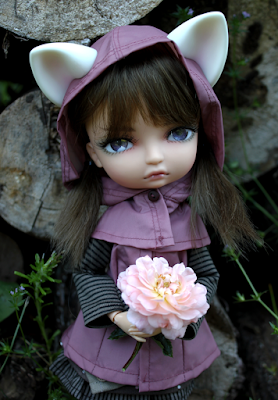 I love the quirky, slightly Gothic look. It's not Gothic in an over-the-top, Wednesday Addams sort of way like Tonner's Agnes Dreary was, but more subtly so. Lila has a ton of personality in that grumpy face. Some people prefer smiling dolls. I prefer pouting ones.

I want to show you the box, first. Please excuse the glare. Everything about this doll is so shiny! She wasn't tied into the box. Instead, there was a clear plastic cover inside the box holding her and her accessories in. She came with a waist-grip stand, extra hands, a raincoat, stockings, cat ears and a tail, and boots. 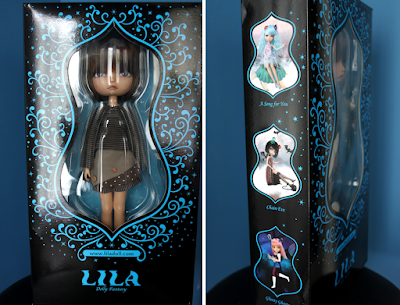 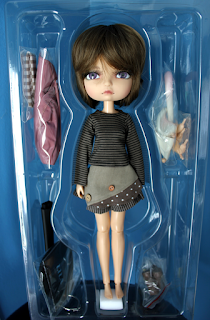 It was so difficult to find any information on this doll in English! She's made by the South Korean company Soom, and I kept seeing fan pages about her in French, German and Spanish. She seems to have a bit of a following, although it looks like her fans are spotted here and there all over the globe. In English I found one Facebook group and a Flickr group. So I'm doing my duty and putting out some information about her for English speakers. I'll try to be thorough. :) 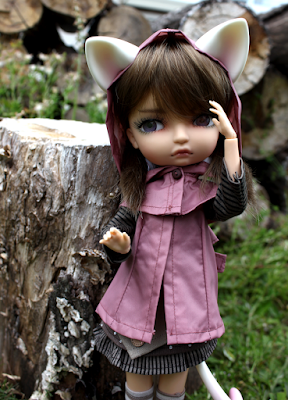 "A Very Catty Day" Lila came with removable cat ears and a tail. I thought that was terribly fun! The ears just stick on her head with magnets. I love this, because you could theoretically use those same magnets in her head to attach all kinds of neat things like devil horns or antlers or the like. Unfortunately Soom doesn't actually make any additional attachments for Lila (Why don't they? Argh!), so you'd have to get them from some other BJD site, or make them yourself from clay, and glue on magnets. Still, lots of possibilities there. 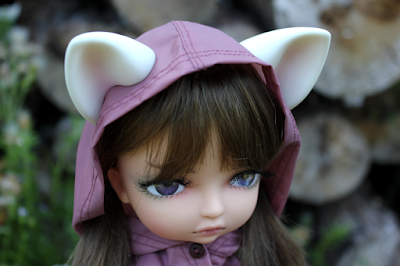 The tail is not magnetic, but instead is held on with a pin that goes into a small hole in her lower back. The pin looks a little delicate; I'd be afraid to yank on it. The company did include two extra pins, though, which I assume are in case one breaks.

There are also a couple of small holes near the shoulders, which don't have a function for this particular Lila, but are where wings attach on a few of the other Lila dolls. So far there have been four Lilas made with wings.

I want to discuss Lila in a few different sub-headings, so let's start with Lila's face. 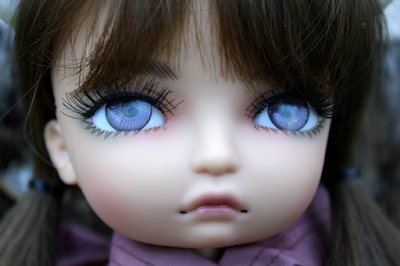 Notice her eyes peeking in different directions in the pictures? The doll has two knobs on the back of her head that you can twist, to individually move each of her eyes. She can look left, right or straight, or anything in between. She cannot look up or down, though. The knobs are easy to use, but stick out from the head way farther than they need to. You can still pretty much hide them under the wig, though. 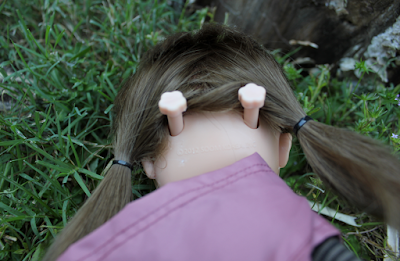 Her eyes are SUPER reflective, which makes them tricky to photograph. In some photos the eyes look like they have a glaze over them. (Or "cataracts," as one person put it. LOL.) Despite being harder to photograph, they look neat and add to her mysterious Gothy look. 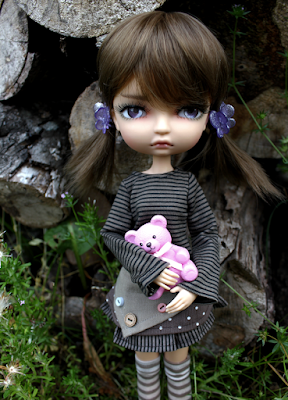 You can't change her eyes. I have seen some really amazing and creative Lila doll customs, though, where people actually got into the head, replaced the pupils of the eyes manually, and then closed up the head again. This is not easy to do, because the head is apparently glued shut and you have to get in there by slicing the glue with an Exacto knife. I'm too scared to attempt it. 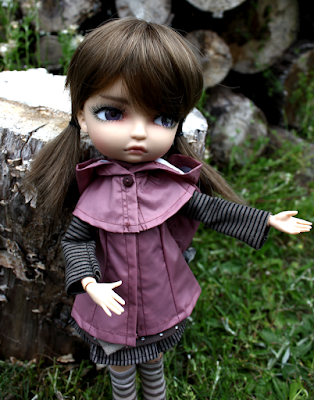 The doll is bald under the wig, which is removable and changeable. Her wig size is an 8-9", the same size as Pullip, and Tonner's Patience. The wig in these photos is her stock wig, although I straightened it by dipping it in boiling water. 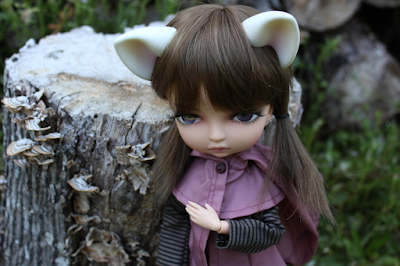 The face paint is beautifully done. It looks hand-painted, with individual eyelash hairs and wonderful eyebrows, and I can't find a single flaw in it. This is apparently not a mass-produced, factory-screened face. 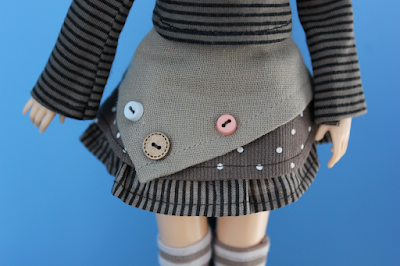 The clothing is a mix of wonderful and disappointing. The fabrics used are nice and it's well sewn. That skirt is so cute! But the shirt fastens with velcro in the back (the skirt has a hook-and-eye), and the shoes are just plain plastic and completely underwhelming. Seriously, for such a high-quality doll in most other respects, she should have had some nicer shoes. I couldn't even get them on. 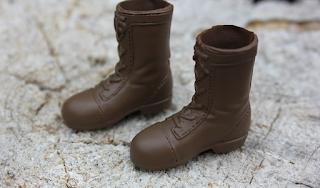 "Catty Day" doesn't come with underwear (I guess because of the tail?), but some of the other Lila dolls come with really nice quality panties.

The raincoat fastens at the neck with snaps. It's not lined, but looks really nice, I think. 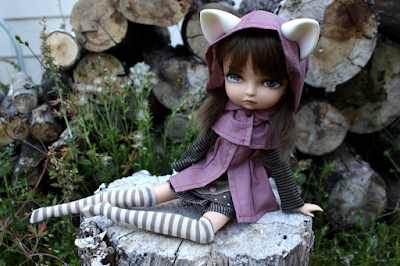 THE BODY, AND POSING

The articulation on Lila's body is pretty nice, with bending elbows, wrists, ankles and knees. She can touch both her mouth and forehead, which not all dolls can do. Her upper thighs have a rotating joint that lets you turn her leg, which means she can sit with one leg crossed over the other to an extent. 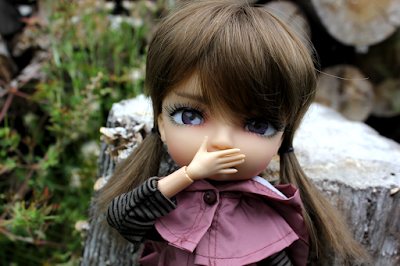 Like most big-headed dolls, she's top-heavy, though, so posing her pretty much requires balancing that head of hers. She can sit nicely with thighs together, BUT the weight of her head makes her want to fall over, so she sits most easily when her back is against something. Otherwise, it's a balancing act where you have to prop her up with her hands so she doesn't topple backward, like in the photo below. 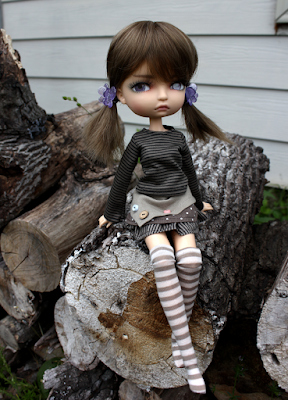 She comes with extra hands! She has a total of four pairs of hands (three additional). They all have fingers in different positions. The hands pull out at the wrist so you can change them out and mix-and-match. I discovered the extra hands fit really well in the wrists: not too loose and not too tight. 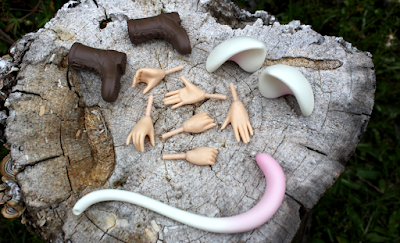 By the way, Lila dolls are made from ABS plastic, not resin like most of Soom's other dolls. This is a very tough material that doesn't yellow, and is more stain-resistant than a lot of other plastics. I'm a huge fan of this material. 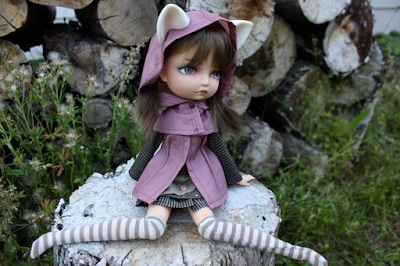 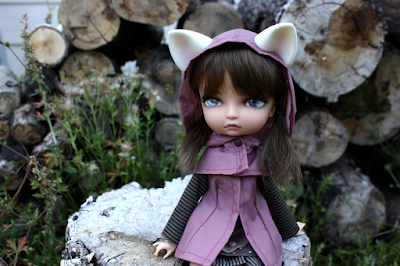