So I thought I'd try out a few.  Came to the conclusion that shoes for the 13" Dianna Effner Little Darlings dolls might fit, since Tween Scene's feet are exactly 50mm x 20mm and Little Darlings shoes are close to this.  I bought three different kinds to try.  Two were perfect, and the third was not quite.  I also tried Hearts 4 Hearts and Delilah Noir doll shoes on them, too, but those were both way too big.  MSD-sized shoes for Asian ball-jointed dolls are too big as well.

Here are my results with the Little Darlings shoes: 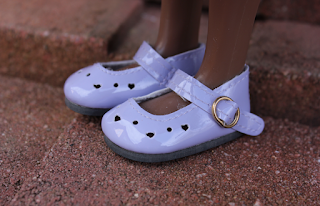 1st pair:  Lavender patent heart mary janes from Debs Adorables on eBay.  These were really 99% perfect except that the straps are a little too long for the Tween Scene feet.  It could be corrected quickly with a pair of scissors, but I decided to just leave it as-is.  They look pretty cute.  They work either with socks or without.  This merchant only sells to the United States, though. 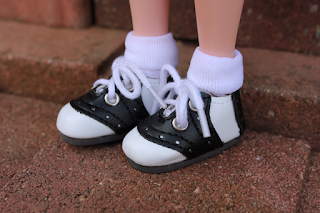 2nd pair:  Black-and-white saddle shoes from JuJu's Dolly Mall on eBay.  These are 100% perfect and awesome, and SO CUTE!  They even came with the socks.  Was very pleased with this purchase.  JuJu's sells internationally, although they're located in the United States. 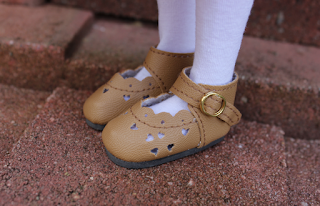 3rd pair:  Tan heart cut shoes from JuJu's Dolly Mall.  (Same link as above.)  These were ... not perfect.  The fit was a little loose in length and width, so they need to be worn with socks/tights.  The biggest issue was they were too HIGH for the Tween Scene's foot.  It may not be obvious in the pictures, but it was bugging me a little seeing it in person.  I think they'd be fine if I put a Dr. Scholl's-style insert in the bottom, so that the foot is raised up a little bit inside the shoe.  I think if I did that, it would look OK.  Not pleased with this purchase.

I'll close with some more random shots of these girls, since I spent a couple of weeks making them outfits.  I made all the clothes in these pics.  Now you know why I needed more shoes.

See ya!  Click on the pics to make them bigger.

I thought it would be interesting to point out a few things I noticed about the Prettie Girls Tween Scene dolls.  I got five out of the six characters.  The only one I'm missing is Kimani, who is dark-skinned like Dhara, but with brown eyes and curly hair.  I might pick her up later.


The five I have are actually five different skin tones.  That surprised me, because I would have expected Hana to have the same skin color as Alexie.  Although you might not be able to see it in my photo, their skin colors are different.  Hana is veeeeerrrry slightly darker, with more of a pink tone.  I think it would be lovely to see another variation of Hana one day that used Valencia's tan skin tone, to represent people from places like Indonesia.  Anyway. ...

Lena and Dhara have different skin tones as well.  Lena's is subtly lighter, and a whole different tone than Dhara's.  (Dhara is the one with the tiny braids.)  I love this, because it makes it easy to tell the dolls apart in person.  ... Good news if you have two daughters who both like dolls.  I have no idea whether Kimani has the same skin tone as one of these ladies, or yet a sixth skin color.  Lena has hazel eyes (a mix of green and brown), and Dhara's eyes are more pure green.


I have to mention Dhara's outfit.  She was one of the three I'd ordered from the Walmart.com web site, so I didn't get to see her before she was shipped.  When she arrived, there was a bit of a surprise.  The photo that's on the Walmart web site shows her wearing a flower-printed dress, yet this is what she arrived in!  This outfit is cute, but not what I was expecting.  I'm wondering if there are some other versions of Dhara out there that have the flower-print dress.  Crazy, huh?

I noticed the promo pics on the One World Doll Project web site show the correct outfit.  Anyway, if you order this doll, be aware this will probably be the outfit you get.  It comes with red sneakers, by the way, and an extra shirt made from the same floral fabric as the pants.  All the dolls come with an extra shirt, which is so awesome. 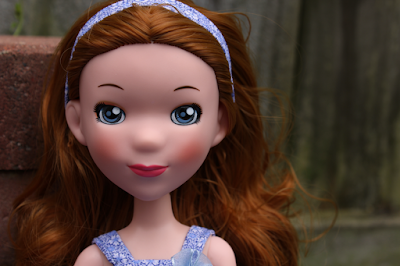 Another thing I noticed is they aren't all the same face sculpt!  When I first heard about this line, I assumed they'd all be the same sculpt, but I was wrong.  I'm seeing several differences between the sculpts on a few of them.  I don't know how many head sculpts are in this line total, but I aim to find out one of these days.  I think that's great news, because it means that going forward, the dolls won't end up all looking like clones of each other with different hair and eye colors.  It helps each have their own unique personalities.


I think they look so cute all sitting together.  I made all the dresses you see in that first photo.  The shirt-and-jumper outfit on Lena (below) was made from the Maudlynne Macabre-sized "Autumn Stroll" pattern by Designs by Jude.  Maudlynne uses the same body as the Tween Scenes, so the fit is perfect.  Any Maudlynne Macabre patterns will work for the Tweens. 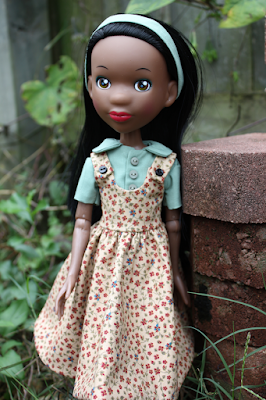 You can read Part 1 of my look at the Prettie Girls Tween Scenes at this link here.
And a post about shoes that fit them here.

The 16-inch Prettie Girl Tween Scene dolls have finally made it to my area Walmarts.  These are the dolls produced from a creative marriage between One World Doll Project and Robert Tonner.  They use Tonner head sculpts on his Maudlynne Macabre body, and are based on designs and characters by Stacey McBride-Irby of One World.  I'm a big fan of Tonner sculpts, so I just had to see these dolls in person.


I went to three Walmarts looking for these, and all three stores had the line ... to an extent.  Two only carried the characters Lena and Valencia (shown here), and one carried Lena only.  There are six characters total, so where were the others?  I guess Walmart's limiting shelf space to see how well they sell first before they put the entire line on display.  (Um, I guess.  In my area, in any case.)  I ended up ordering three more characters from Walmart.com, which has the entire line plus some outfit sets.   I can't wait to see them!  They should be here soon.  I wanted to show you my first two, who were found sitting on the shelf at the store. 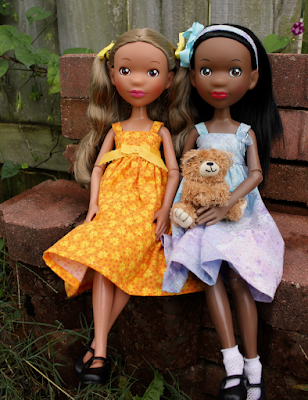 I really like these.  They're personable and charming, and pose beautifully.  I won't do a full review, but I'll just give you my own personal impressions.


First, they pose nicely with no loose jointing, with bending elbows and knees.  If you raise their arms in the air, they stay up.  They can sit in a chair like ladies, with their thighs together.  I can't stand when dolls' legs splay far apart when you try to get them to sit!  You can make them sit with their ankles crossed, which looks adorable.  They can even cross one knee over the other to an extent, which is awesome. 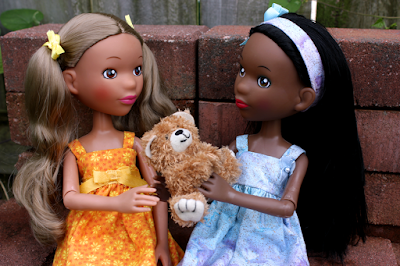 Their hair is really soft and nice, although I cut a chunk out of Lena's hair trying to get it out of that awful plastic strip thingie they sew playline doll's hair into.  *Weeps*  Next time, I'll wear my reading glasses so I can actually see what I'm doing.  And of course it's on the top of the hair rather than the underside.  Because of course.


Eye paint is really nicely-applied and doesn't look cheap.  And at this point, I'm realizing I'm using the word "nice" a lot, so I'll stop now.  LOL.  But they're really nice, ya know? 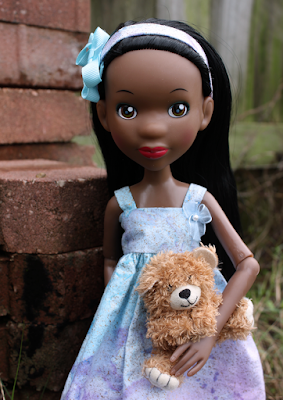 The clothes they come with are decent.  Not collector doll quality, but they're fine for playline clothes.  The seams aren't finished (like every play doll ever), but at least the fabrics are soft and a decent quality, and they're sewn well.  The dresses you see in my pictures are ones I made years ago for the LittleMissMatched doll, which had the same body as the Tweens and Maudlynne Macabre.  I'm so glad I kept the dresses all these years!  I'd made a bunch of them, so my girls already have quite a wardrobe.  I love them in soft, flowy skirts.  I didn't take pictures of them in their default outfits, I'm afraid. 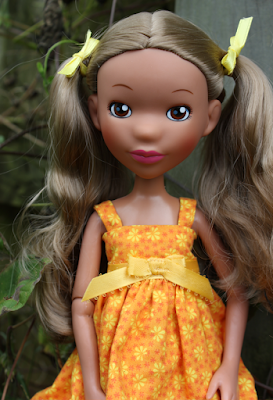 I think I've come full circle now, because my very first post EVER for this blog was about Tonner's LittleMissMatched girls in 2011, which were new at the time.  And now I'm showing off their descendants, with similar (but not the same) head molds on the same body sculpt.  I just realized I've been doing this blog for almost exactly four years!

I'll post pics of the other three Tween Scenes when they arrive.  Click on the pictures to see them bigger.

EDIT:  They arrived!  You can read Part 2 of my look at the Prettie Girls Tween Scenes at this link here.  And a post about shoes that fit them here.
Posted by Me at 5:03 PM 4 comments: