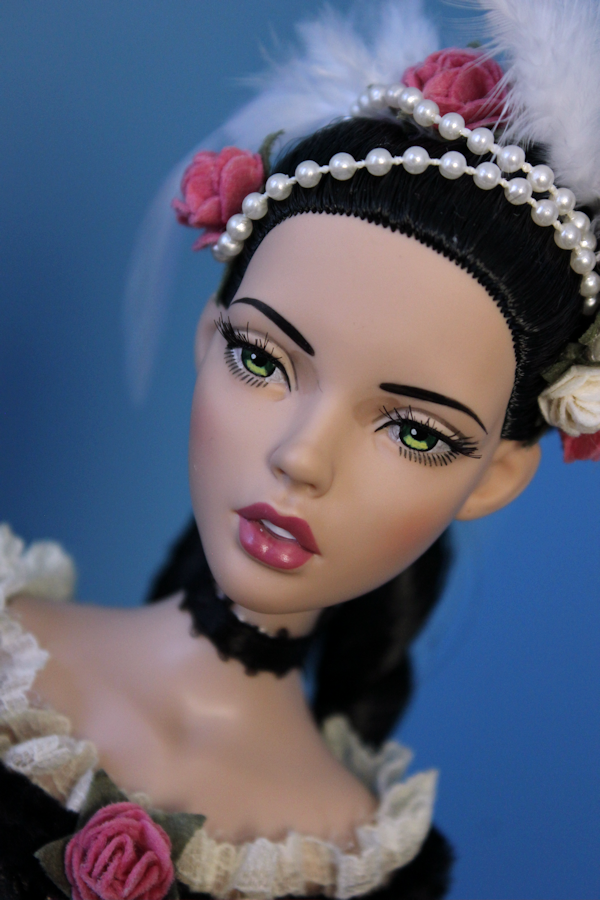 Yup.  Another Deja Vu.  This is 2014's "Fleur de Minuit" Deja Vu by the Tonner Doll Company, and she's so perfect I can't bring myself to take down her hair or undress her.  Just wanted to show off a few pictures.

Her hair is black, not just merely a dark brown.  Her eyes are a vivid, bright green.  The more modern "Spicy Night" Deja Vu also has green eyes, but her eyes are a different shade of green ... more olive-toned.

Fleur's dress is made from a high-quality brocade, and she has a full petticoat on underneath the skirt.  The dress fastens in back with snaps.  Underneath, she doesn't have separate panties, but instead has that type of pantyhose that has attached white panties at the top.

She comes with a black choker with a snap in back so you can take it off, but no jewelry (doesn't need any, in my opinion).  The roses and pearls in her hair are sewn on, but they could be carefully removed if you wanted to with a gentle use of a seam ripper or embroidery scissors. One you took them off, though, there'd be no getting them back on again. 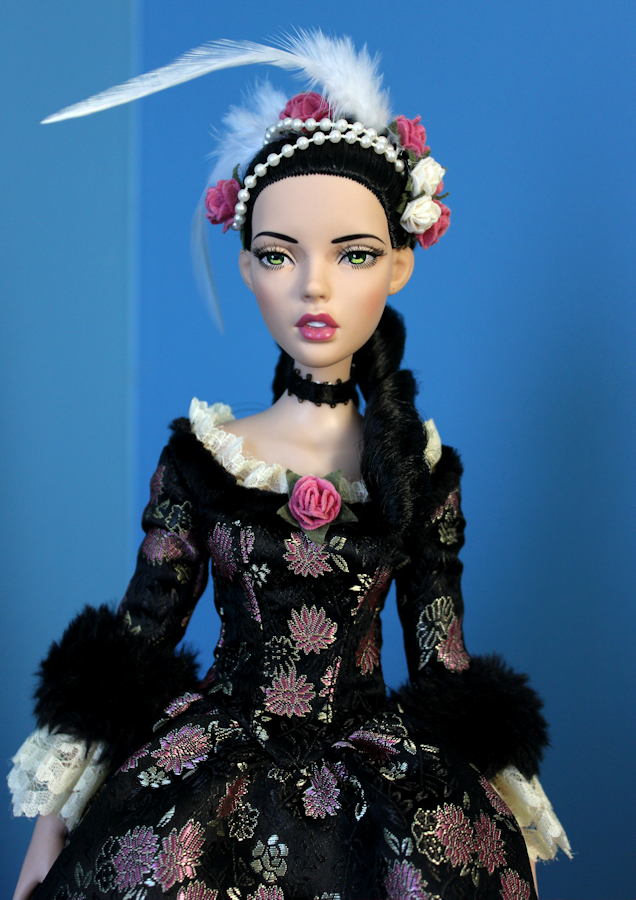 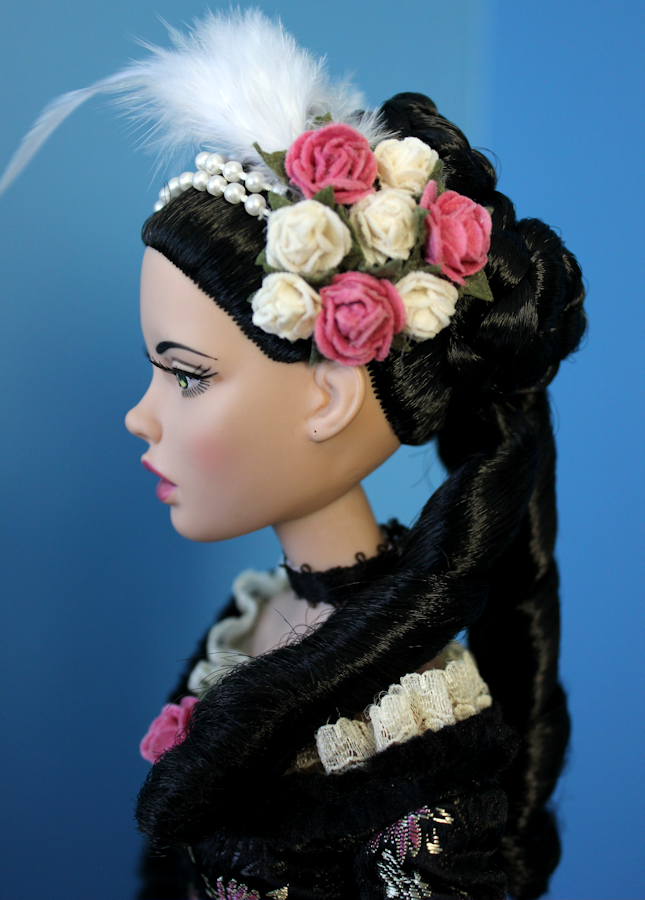 The hair is an elaborate 'do with braided buns in the back and long sausage-curl tendrils. 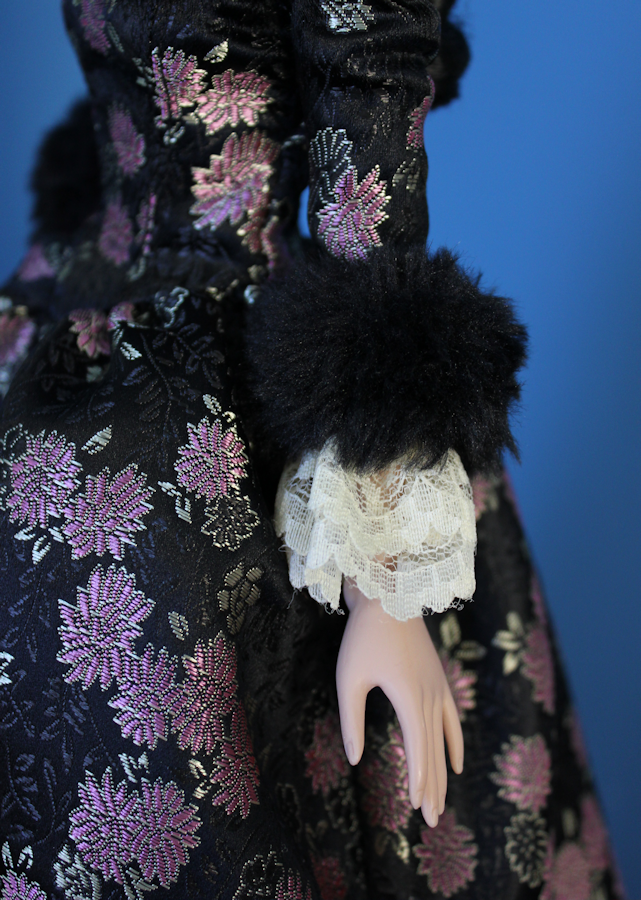 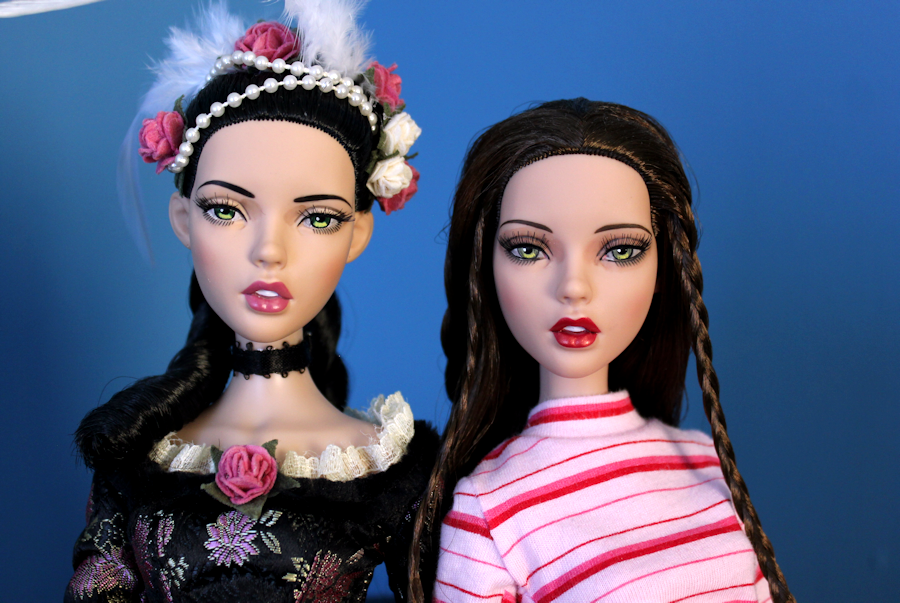 I posed her with "Spicy Night" for comparison.  They seem to have the same face screening, but their looks are so different!  I'll end with a direct face comparison.  Click on the pictures to see them larger. 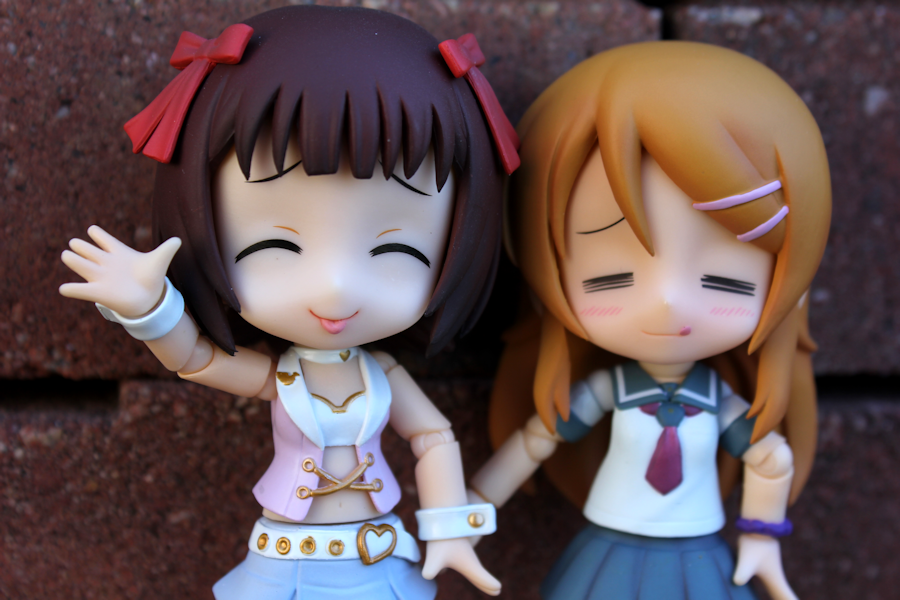 I first became interested in these 4.5" (11 cm) tall Cu-poche figures about a year ago.  They've only been around since the first half of 2013, so they're not even two years old yet as of today.  There are only 18 characters available so far.  Some are sold out on the official web site; the newest are up for pre-order. 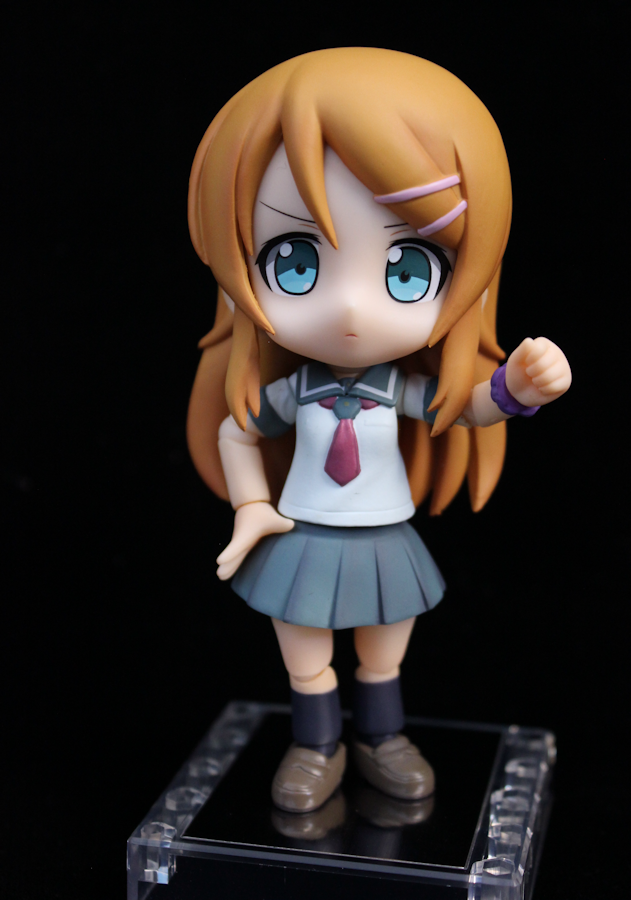 The manufacturer is Kotobukiya, headquartered in Tokyo, although they also have a division in California that serves the North American and Central American markets.  They do different characters from anime and/or manga in the Cu-poche line.

They're definitely not made for young children.  They come with so many small pieces!  They each come with an assortment of interchangeable arms, hands, and face plates as well as accessories that suit their characters.  These came with three face plates apiece, each with a different facial expression on them, and several different sets of hands. 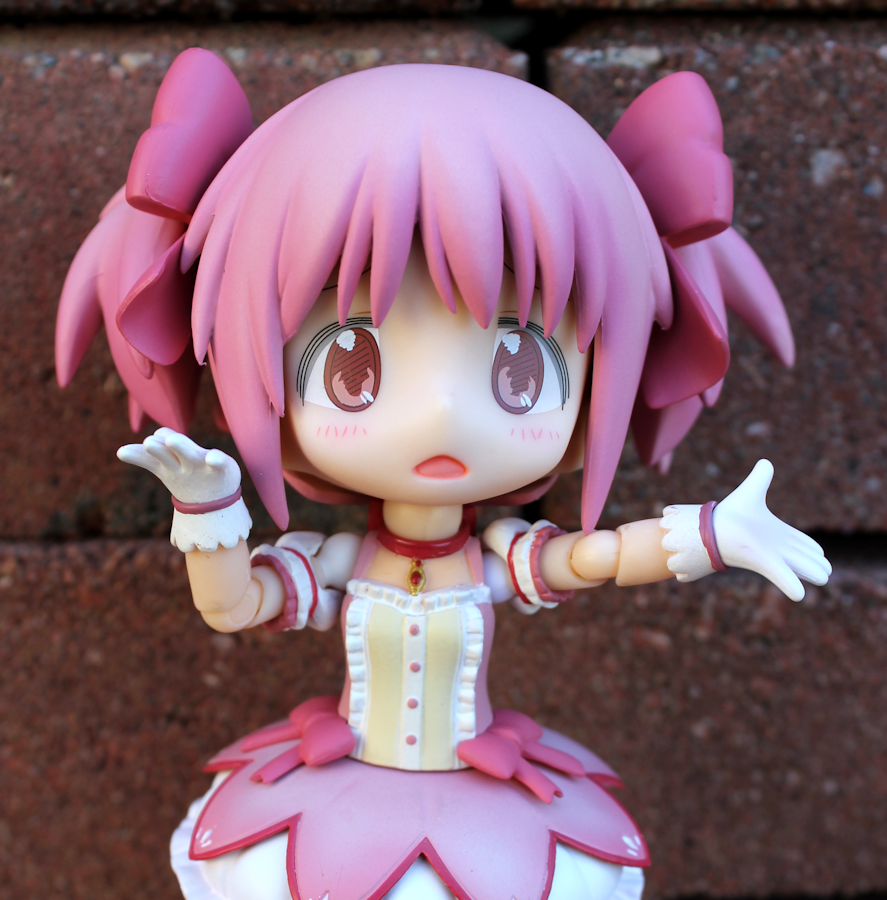 They are often compared to another line called the Nendoroids, which are shorter and slightly less articulated, but have a similarly-sized head and also seem to come with three face plates/heads apiece, extra arms and several accessories.  The Nendoroids were around first, and therefore there are more to choose from.  I chose to buy the Cu-poche line because I liked their overall proportions better, and because of the nice articulation in their arms and legs. There would definitely be room for both lines on my shelves, though!

This Cu-poche below is called Haruka Amami from the anime The Idol Master, and she was the very first figure released.  I noticed her joints are a little looser than the joints in my other figures, so apparently it was a small problem with the debut figure that they fixed for the later releases.  The waist and wrist joints are loose on this one, but on my other figures, the joints are nice and tight. 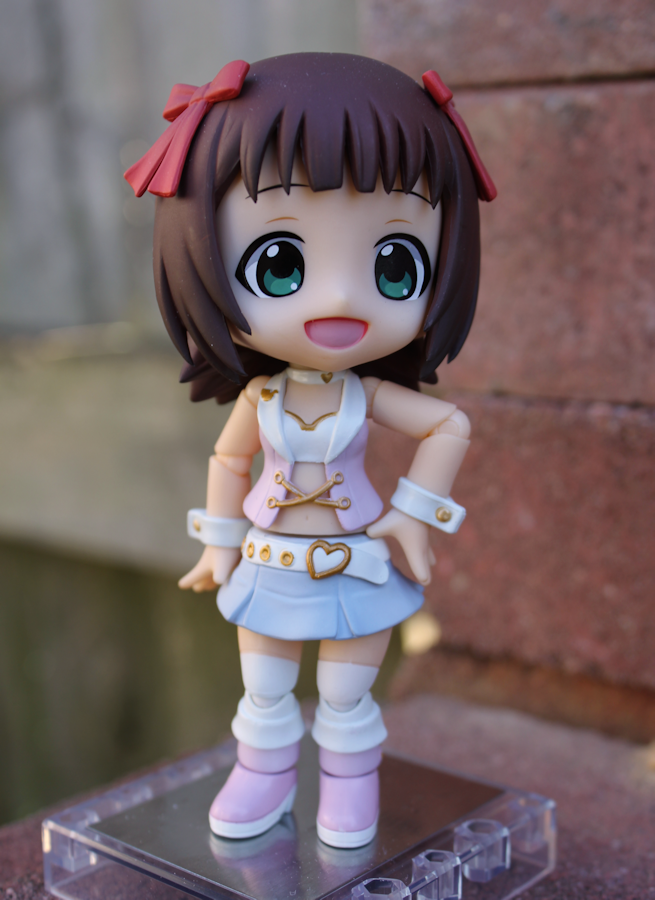 In the pictures below, you can see I was playing around with switching their hair, face plates and clothing.  They can wear each other's hair!  Their feet are magnetic like the feet of some Obitsu dolls, and they come with little square magnetic stands that work quite nicely. 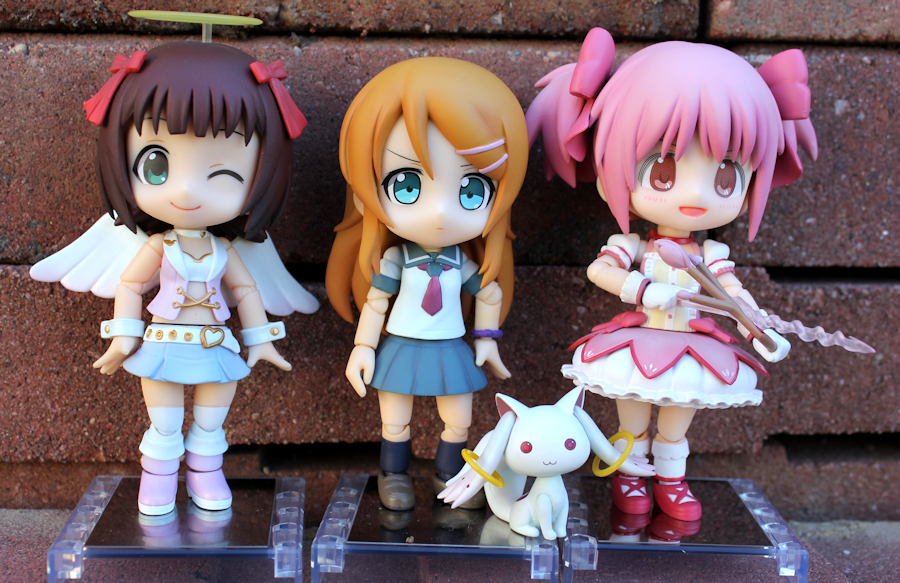 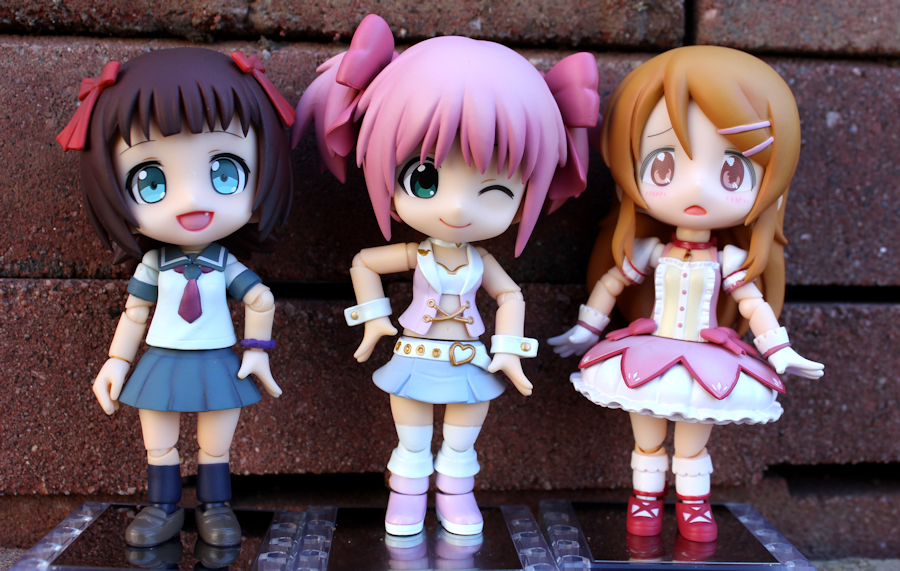 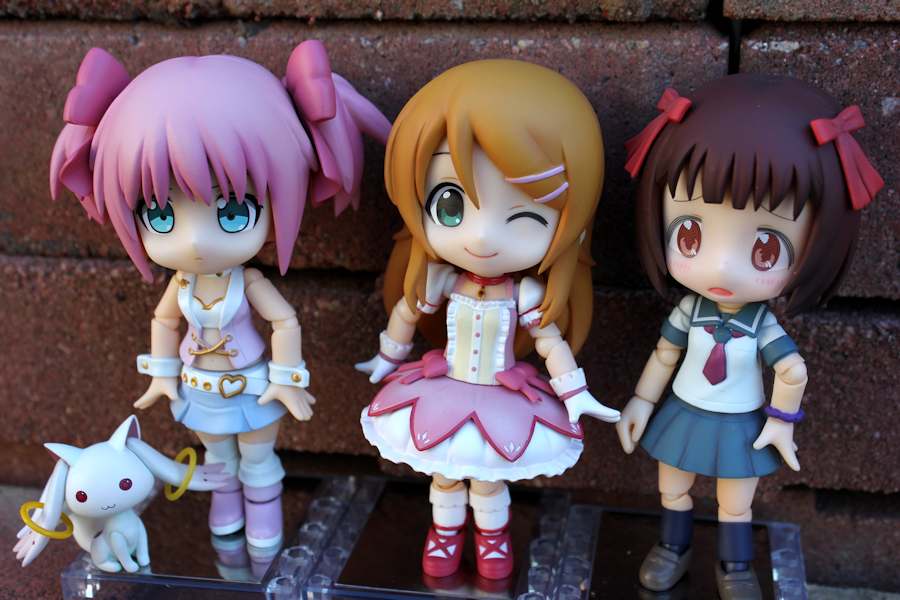 You definitely have to price comparison shop for these, because the price can vary by as much as $30-$40 for the exact same figure based on where you buy from.

I'll show some pictures of the figures disassembled so you can see how they're put together.  Here you can see that the top half of their bodies can be taken off the bottom half (and therefore mixed-and-matched with pieces from other figures); the front half of their heads come off so you can switch face plates; their hands are separate from their arms so you can switch them out for hands in different positions; and their hair has both a front piece and a back piece.   They come with a LOT of different hands!

This is Haruka again.  (Not showing all the hands, face plates and accessories she comes with, just her most basic pieces.) 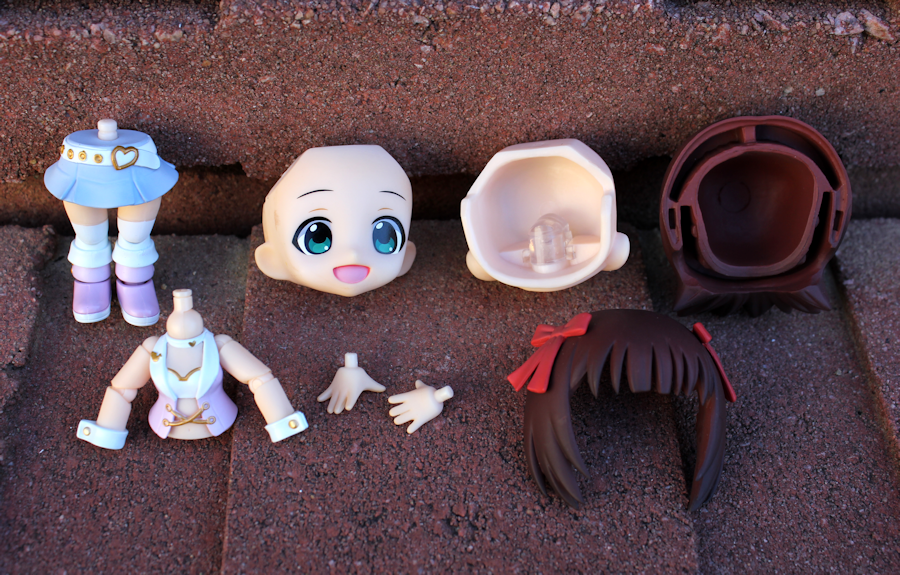 Here is another character called Kirino Kousaka, as she looked when I first deboxed her. 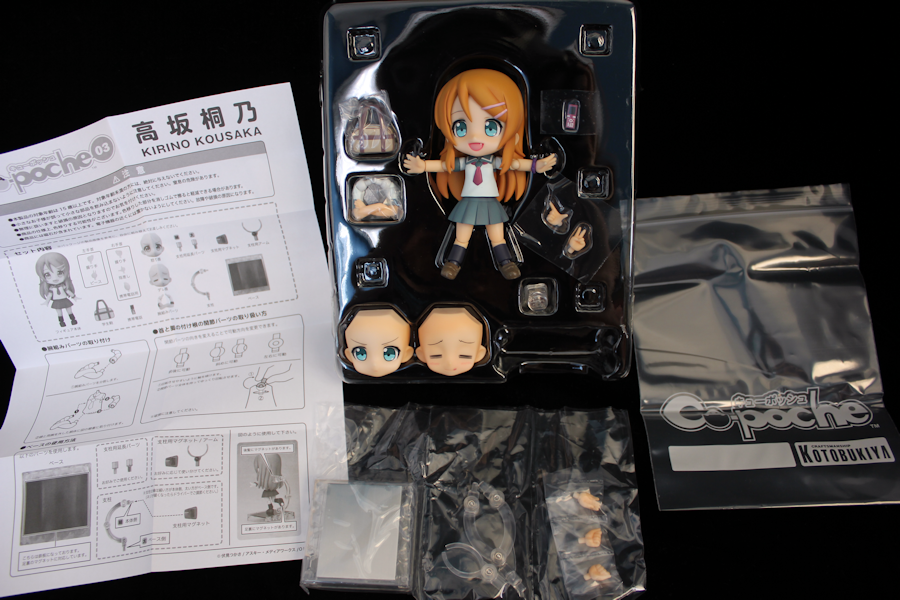 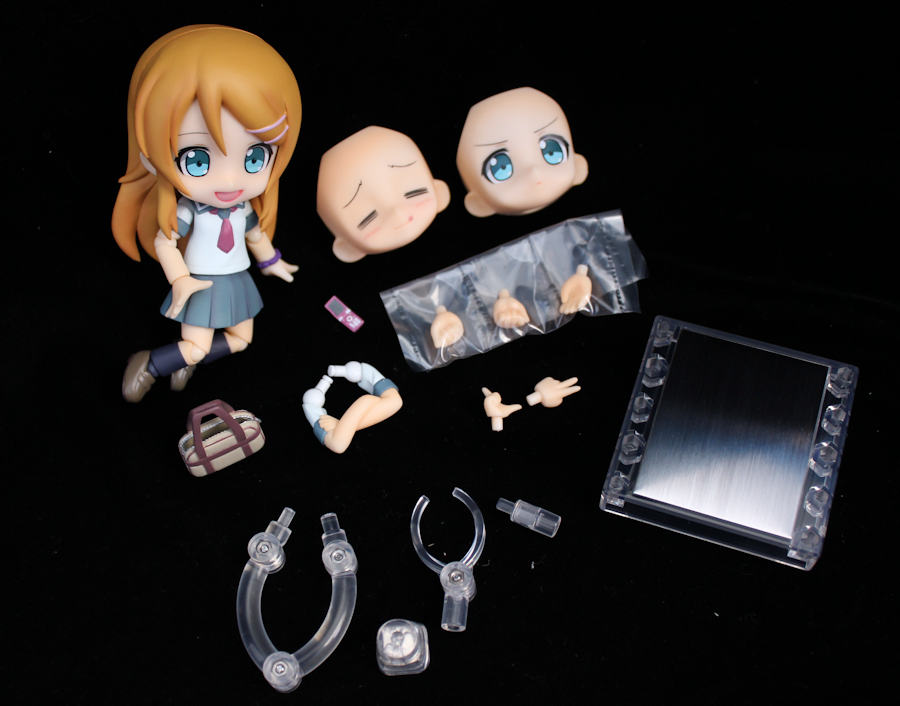 I love the anime series Puella Magi Madoka Magica, so I had to get this character in pink, called Madoka Kaname.  She comes with the little alien cat-thing (Kyubey), and a bow-and-arrow set. 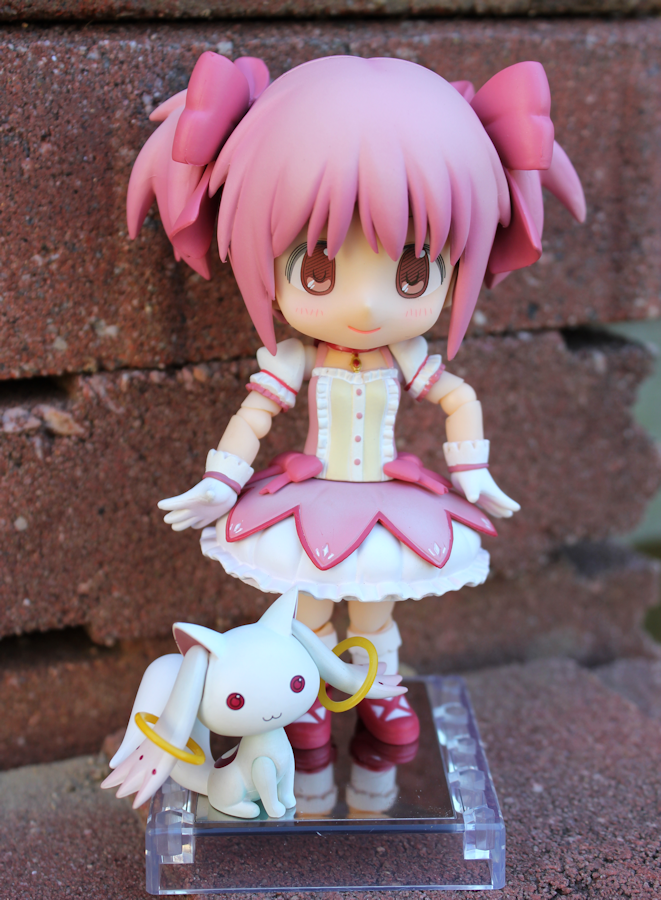 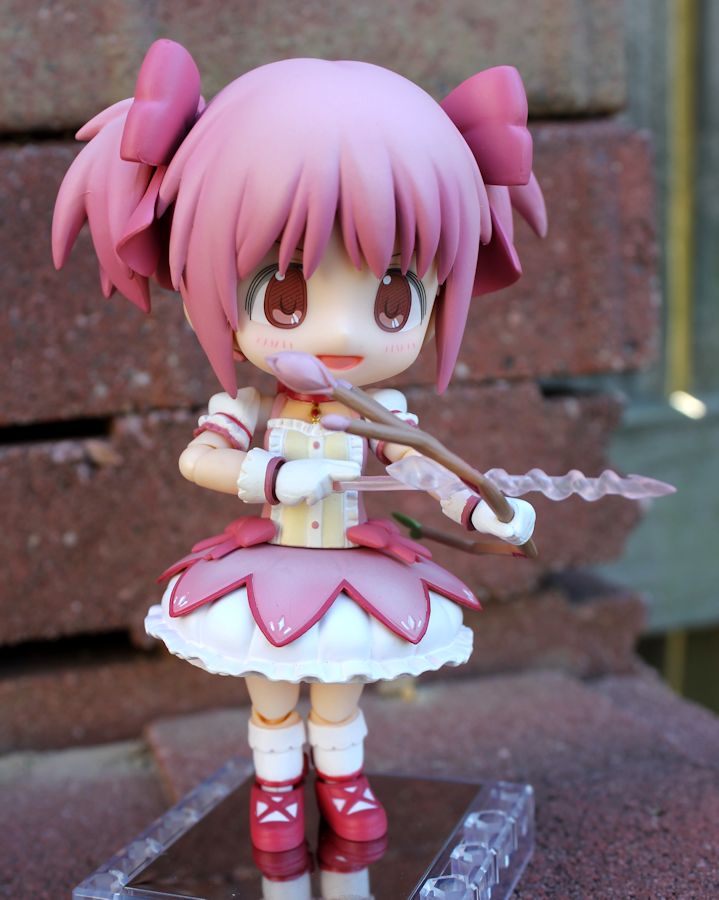 The company seems to have taken some inspiration from Pinky Street figures and Obitsus as well as the Nendoroid line.  Anyway, I think they're fun.

Click on the pictures to make them bigger.
Posted by Me at 10:41 AM 2 comments: 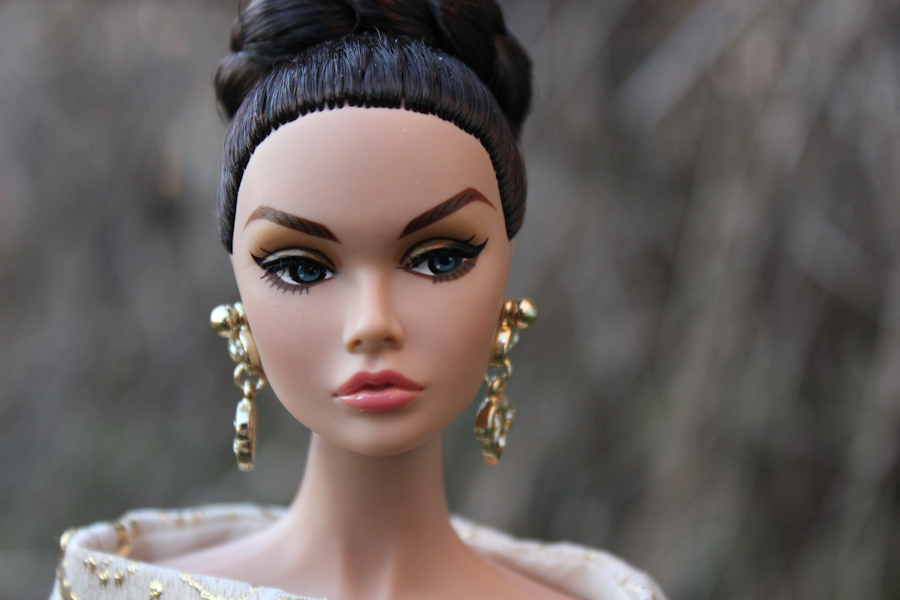 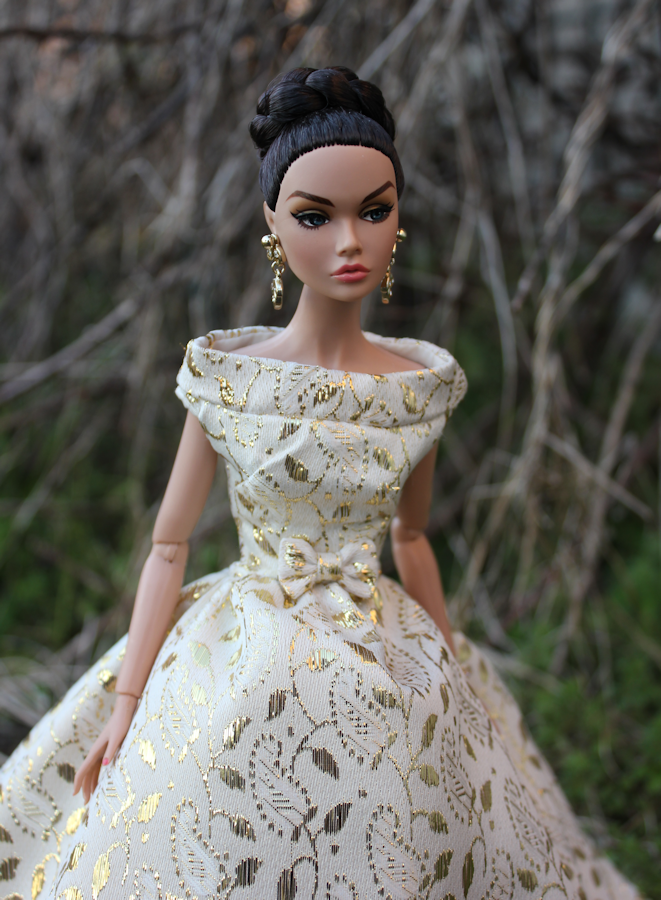 I haven't covered 12" dolls for a while, so I thought I should rectify that by showing you two of my newer Poppy Parkers.  I got them both this past year, but haven't put them on the blog yet. This beauty is Joyous Celebration Poppy Parker, who was a W Club offering celebrating the 5th anniversary of the Poppy Parker doll.  I think she's just lovely.  She'll definitely be staying.

She has the same eye screening as the Bergdorf Poppy, I Love How You Love Me, Ask Any Girl and Baby It's You (as well as a slew of other Poppys).

Her earrings are absolutely wonderful.  Her dress is done in a high-quality fabric, with a tiny zipper down the back.  Her shoes are pink to match the fluffy underskirt.  She has one of my favorite hair colors: That shade of brunette that's so dark brown it's almost black, but not quite. 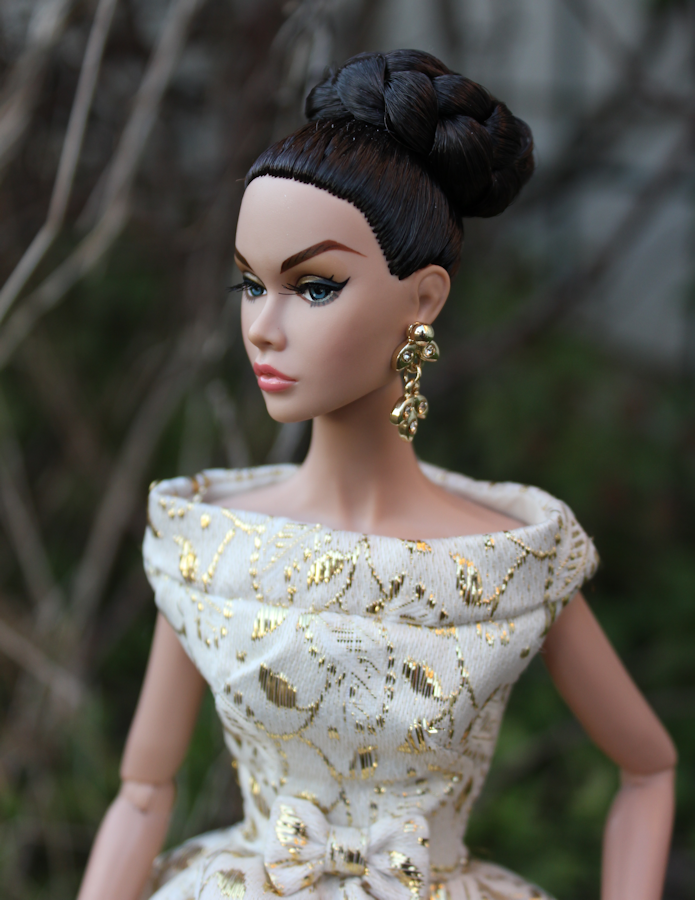 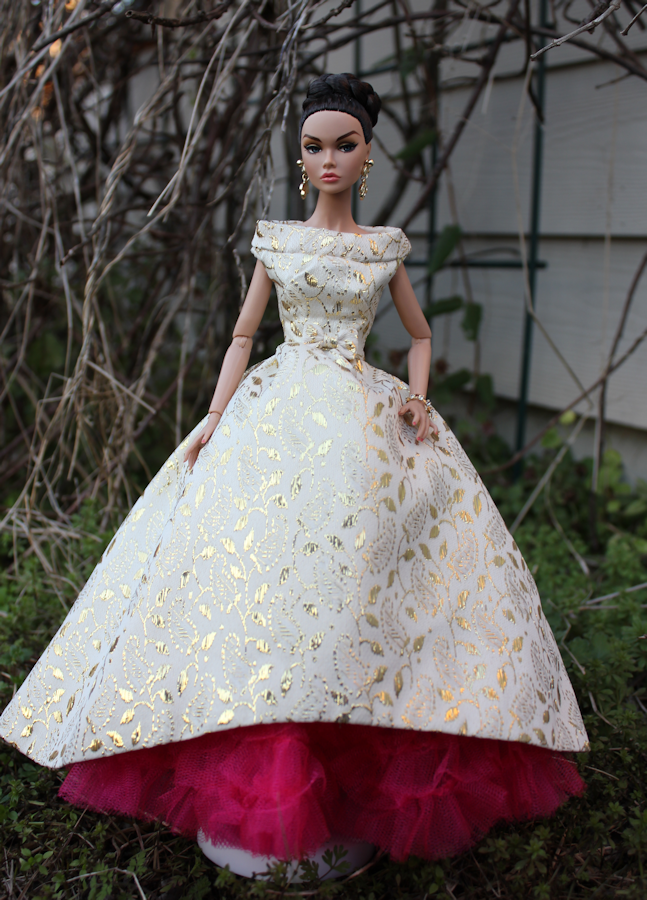 And since it's Poppy week, I'll show you another I got last summer.  She's the silver-haired "Sebina Havoc: Mistress of Disguise" Poppy Parker.  This doll came with two heads and I had no interest in her other head, so I ended up selling it before I even got a picture.  This head is so pretty, but I've been planning to do a partial reroot on her to fill out her hair in the back.  Her hair came in a ponytail, and when I took it down, I discovered a pretty big bald spot in the back of her head.  Turns out she's a match for the "silver bullet" saran doll hair sold on dollyhair.com, so I ordered some of that for her.  I still haven't bothered to do the partial reroot yet, though.  (Sorry, but I don't know what the color saran is called on the Restore Doll site, since I don't use them.) 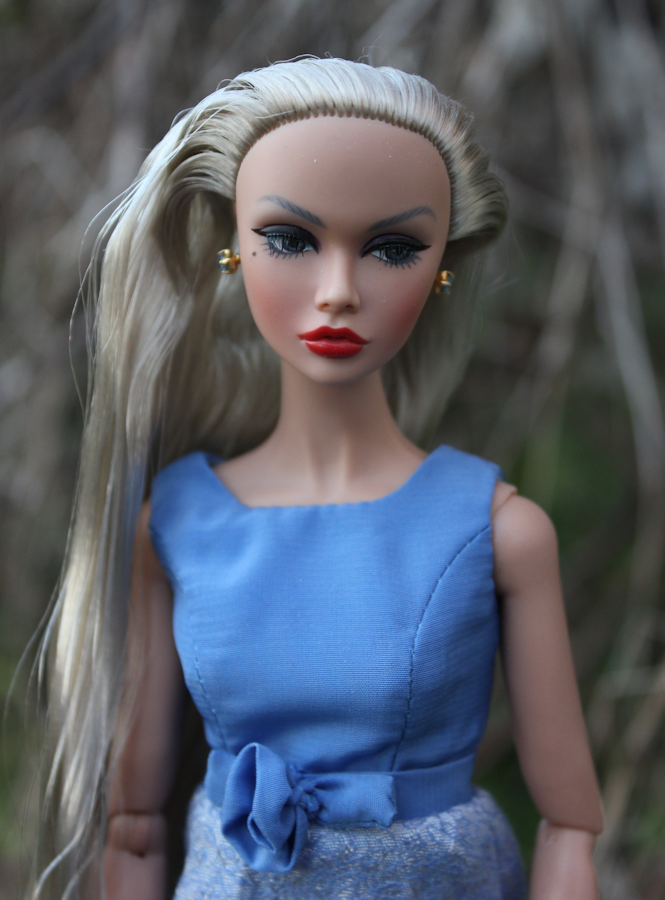 Here she is, looking sad that she still has a bald spot in back. She does look good in blue, though, doesn't she?
Posted by Me at 4:52 PM 4 comments: