The "I Can't Believe It's Not Resin" doll - Obitsu Haruka 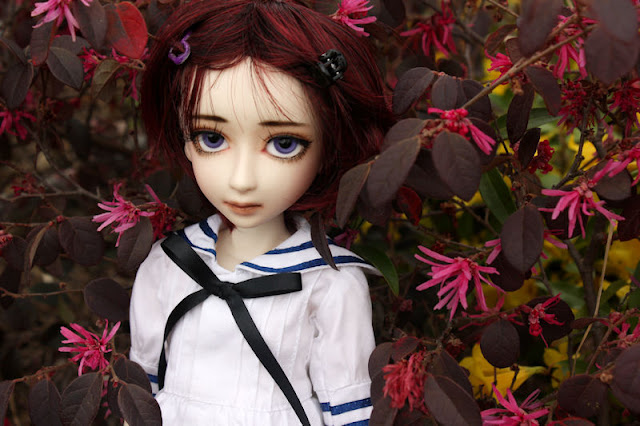 I'm totally enamoured of vinyl dolls that resemble the resin Asian ball-jointed dolls (bjds) in sculpt and form.  You probably saw my post about the "Alice" head sculpt for the 40cm Obitsu body, below.  Well, the "Alice" head was the head that came with the body when I bought it, but the clever thing about Obitsus is their heads are more or less interchangeable (depending on which heads you're looking at).  Not being totally in love with "Alice," I decided to try a different head for the same body.  I chose the "Haruka" head, which Junky Spot in California was selling separately from the bodies, unpainted, for cheap. 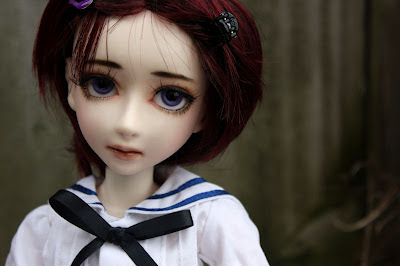 Ahhh ... I like this head so much better.  The "Haruka" head is recommended for the Obitsu 47cm and 50cm bodies, but I think it looks just fine on the 40cm body as well.  She does look more child-like on the shorter body, though, which is just okey-dokey with me.  These pictures show her on the small-busted 40cm white-skin body.  (Yes, she is their "white" skin ... as opposed to their "fleshtone.")  I love the 40cm body because it's the perfect size to wear all those lovely "MSD"-sized clothes floating around the Internet.  (The 1/4-scale bjd clothes. The 40cm body translates to a 17-inch doll.) 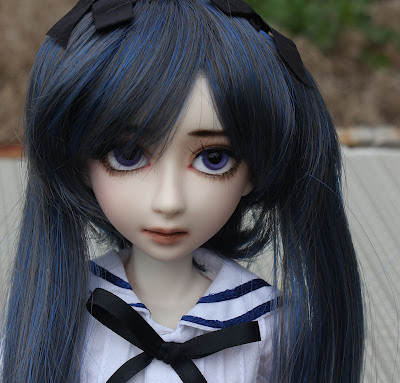 She has 16mm glass eyes that fit perfectly in the eye wells without the use of putty.  The eyes go in easily, but are sort of tricky to get out again once they're in.  You sort of have to push them out by plunging the eraser end of a pencil through the eye socket to push the eye inward, trying not to scratch the eye paint while you're doing it.  I'd almost rather use eye putty,  really.  The nicest thing about them, though, is you can change the position of her eyes without having to mess with sticky eye putty.  (Her face paint is by Kloudei on the Den of Angels forum, by the way. ... A very nice person to work with.)

Haruka is awesome, and since she's stolen Alice's body from her, it looks like I'll be selling the Alice head. 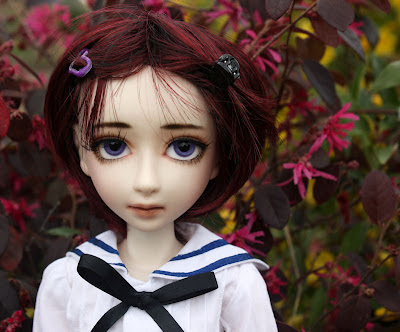 The head size is a little unusual for a doll this scale.  It's a circumference of almost exactly 8 inches, which means MOST size 7-8 wigs will fit, but they will be tight on her.  I don't have any 8-9 wigs, but I suspect most of them should fit, too, but may be loose.  I just mention this for people who've come to this site because they've done a search for "Haruka Obitsu head" looking for info.  The two wigs she's wearing in these photos are size 7-8. They're tight, but not so tight that they're popping off her head.

What a difference a good camera makes ...

I posted these comparison pics on the W Club forum, so I figured I'd also post them here.  The pics show the difference between my old camera and my new one.  My old camera used to consistently take photos like the one of Fashion Royalty Natalia on the left.  My new camera consistently takes photos like the one of Fashion Royalty Vanessa on the right.  I didn't become a better photographer over the past year. ... I just got a much better camera!  If you're a doll lover, a good camera is a great investment. 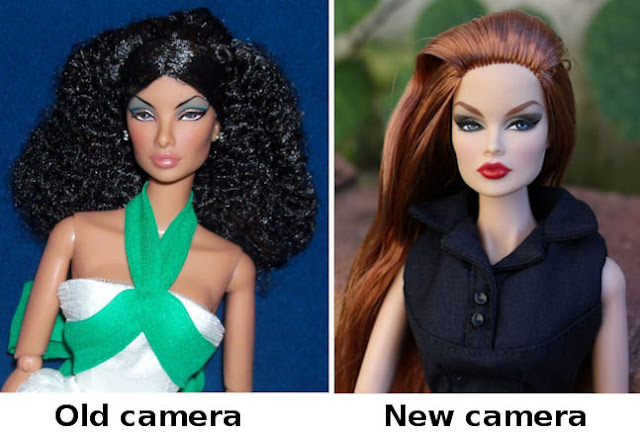 I don't remember what my old camera was, but my new camera is a Canon Eos Rebel T2i.  By the way, the photo of Fashion Royalty Natalia is a flash picture, because if I hadn't used the flash, the picture wouldn't have come out at all.  :)
Posted by Me at 4:12 PM 2 comments:

You all know what Obitsu dolls are, right?  Vinyl/plastic dolls with incredible jointing systems, mostly sold unpainted, with many of them bald and eyeless so you can further customize them by choosing the eye and hair color yourselves.  Kind of like vinyl versions of resin ball-jointed dolls.   Well, while researching Obitsus I suddenly discovered I had some money in my PayPal account that desperately needed spending, so I bought an Obitsu Alice.

She is their "white" skintone (as opposed to their peachier "fleshtone"), and is 17"/43cm tall.  She's on their small-bust 40cm body.  I felt the need to put some information about her on the Internet because there are almost NO pictures of this head sculpt out there. She wears size 7-8 wigs and size 16mm or 14mm eyes.

Parabox, the company that sells the Obitsus, claims she wears size 18mm eyes.  Don't believe them!  The 18mms are so ridiculously large on her that you can't see the whites of the eyes on her and they make her look like a space alien.  This particular sculpt has a bit of a quirky, elfin look as it is. ...   I'm including pics of her in both 16mm and 14mm eyes so you can see the difference. She would really be right at home with big elf ears and fairy wings with a face like this.  LOL!

I'm not sure I'm totally in love with her, but I definitely like her, and I LOVE LOVE LOVE the body sculpt and jointing.  I'm already curious what a different head sculpt would look like on the wonderful 40cm body, because if I wanted to, I could switch out her head for a different one. ... The heads switch out easily.


The Parabox web site has excellent photos of the nude body so you can see the sculpt and incredible jointing system it has.  You can find many photos here.