Review of the Kawaii Crush dolls


I got one of these on a whim after having a particularly bad morning.  I had to get some blood drawn at the doctor, and let's just say, getting a needle stuck in my arm was the best part of my day yesterday.  Sigh.

Anyway, I was feeling a little down, and ended up at Target.  This little panda girl jumped in my basket and came home with me.  I'd been curious about them, and wanted to be able to see one up close.  I adore animal hats.  I loved the blue and purple color scheme on this one, the girl called "Amanda Panda Pop."  Her tiny size also appealed to me (2.5 inches, or 6.5cm).


It turned out the best things about this doll were the animal hats and the packaging.  The doll itself was very disappointing.  I tried to write a "pros" and "cons" list about this girlie, and could barely come up with two things to put on the "pros" list. (I struggled to come up with #2.)

1.  The animal hats fit well and are really cute.

2.  The doll is colorful and has a bit of charm, if you like the big-eyed look.  And I do mean BIG eyes.

1. No arm/shoulder articulation. Those arms are stuck in that position permanently.

2. The Kawaii Crush dolls have a hinge at the waist so they *theoretically* should be able to sit, but their thick rubbery hair keeps them from being able to sit down.  The only way they would really be able to sit is if you gave them a backless stool to perch on.  They cannot use any chair that has a back to it, and cannot sit on a flat surface. 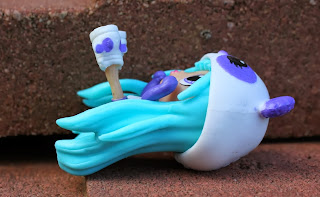 3.  They also can't stand up on their own, which is a bit of a dilemma, since they can't sit, either.  You pretty much have to constantly lean them against something.  I think these girls would have been better off as figurines with bigger feet so they could stand, without the pointless hinged waist.  Either that, or give them short hair so they can sit down. 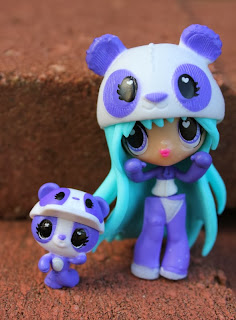 4.  The panda friend cannot stand on its own, either.  It sort of looks like it's standing in my pictures, but that's only because I propped him up against the doll's hair.  He also has these unfortunate lines through his eyes that ruin him for photography.  The line are a part of the sculpt and there is nothing that can be done about them. 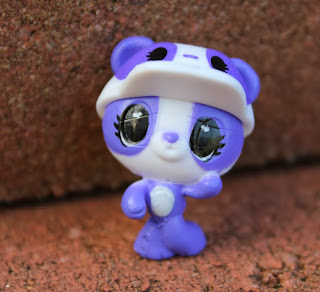 5.  The pajama bottoms are ill-fitting, and split all the way down the back, so they look a little awkward.


6. The small clothing pieces would be extremely easy to lose, making this a bad toy for a very young child.  Those shoes come off, and they are SO TINY! ... Although to be fair, a lot of other toys also have tiny, easily-lost pieces.


Not a negative, but I thought some people might want to know this:  The hair doesn't seem to come off.  I was wondering whether their hair was interchangeable like the Pinypons and PinkyStreet dolls, but it's not.

Here is one more positive I discovered after a while, regarding the animal hats:


I was hoping those cute animal hats would fit other dolls.  I tried the hats on my Fashion Royalty, Poppy Parkers and Momokos, and I was able to just barely squeeze the hats onto their heads.  They fit!  Stayed on pretty well, too.  ... I was expecting the hats to pop off again, but they didn't.  I didn't have a Barbie to use as a model, sorry (I don't do Barbies).  The hats looked especially cute on the Momoko.  The Kawaii Crush girls' heads have a 9.5cm circumference (just under 4"), so if you have a doll with a head that tiny, you might be able to use the hats for them.