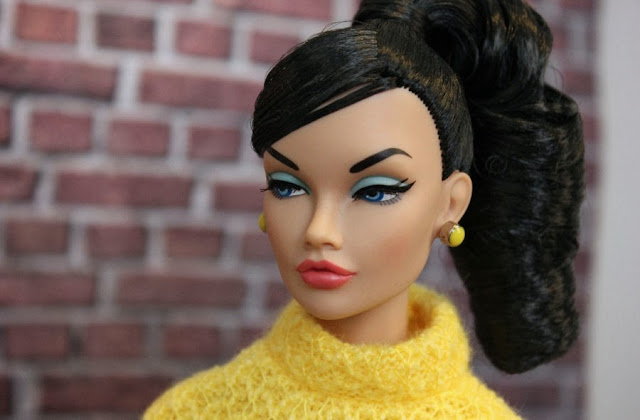 I always have high expectations from Integrity Toys, but these two actually exceeded my expectations.  I think they're just lovely.  They are "Winter Wowzers" and "Magic Moment" Poppy Parker, from the 16" Fashion Teen line.  I only had one other 16" Poppy: "It's a Wrap" from last year's Integrity Toys convention.  There were a total of four dolls from the 2013 collection.  The other two were the blondes "The Glad Game" and "One Fine Day."  I believe the four were supposed to represent the four seasons, with the redhead being autumn and the raven being winter.  Very cool!  I love that.  Each doll was an edition of only 300.

I instantly loved "Magic Moment," the redhead.  She reminded me of Ginger from Gilligan's Island.  I grew up on that show.  I love this doll's hair color; love her dress; love the black faux fur wrap.  It's so soft!  Her eyes are an interesting grey/aqua color that is absolutely lovely.  Each eye is half grey and half aqua in a very literal sense ... very unusual.

I didn't attempt to put on her long black gloves.  I did examine them, and noticed they have a unique design.  They aren't open all the way down their length, but they have slit openings on either side of the wrist.  It looks like Integrity meant for you to take off the doll's hand to slide the bulk of the glove on her arm, and then try to fit her hand inside the opening on the side of the glove.  Theoretically, it should make it easier to put on the long gloves this way.  I attempted it briefly, but it wasn't worth the effort.  I wish Integrity would make optional, removable "glove hands" that have the fingers close together.  I start stressing even THINKING about putting gloves on those splayed fingers Integrity loves to put on their dollies. 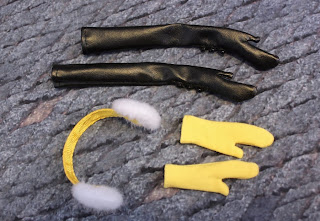 Her gloves seemed to have had all the fingers separated in her promo pics, but the gloves on the actual doll do not have separate fingers.  Maybe they really wanted to give the gloves separate fingers, but came to the conclusion it would be too difficult on a doll this scale?  Don't know.

I got Wowzers mostly because I have a weakness for raven hair.  I wasn't expecting to love her face coloring as much as I do.  She's a sultry vixen!  A bit Bettie Page.  I don't normally like blue eyeshadow on dolls, but it totally works for her.  She manages to outshine "It's a Wrap," with Wrap's more subdued coloring.  I think if the two of them were in a room together, all the boys would be looking at Winter Wowzers, and poor Wrap would feel left out and sad.  LOL.

Out of all four of the 2013 Fashion Teens, I liked Wowzer's outfit the least.  It's OK, just not totally my style.  I wish they'd toned down the BRIGHT BRIGHT BRIGHT on the sweater a bit.  (I guess I'm not into BRIGHT unless we're talking about IQs.)  I wouldn't have chosen a (dalmation? cow? cat?) spotted print for the coat.  I'm just nit-picking, though.  Winter Wowzers is pretty special.  She's fierce and sweet at the same time.  Overall, it's a good look.  I do like her pants and cute boots, and of course the clothes on both dolls are high quality, fully lined and impeccably tailored, like the clothing on all Integrity dolls. 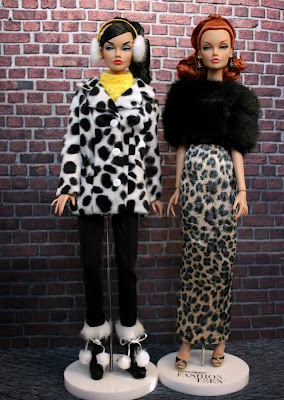 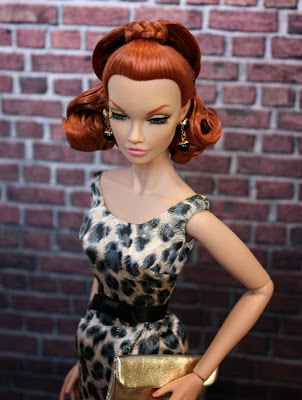 Please click on the pictures to make them bigger.