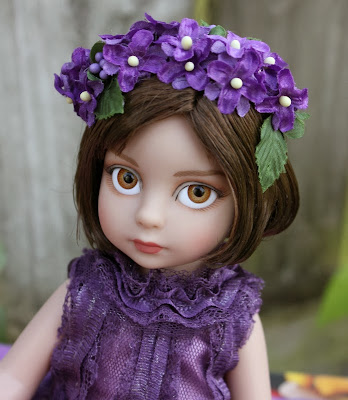 I know this customization looks difficult, but it was SO EASY.  The only change I made to this Effanbee/Tonner "Pretty Party" Patsy was to change the eyes.  That's it.  But wow, what a difference!

I knew this pretty sculpt would look better with different eyes, so I took the plunge and switched them out.  I got out an exacto knife and some full-round glass eyes, and basically did this tutorial.

It involved peeling off Patsy's glued-on wig, then cutting a round hole in the back of her head with the exacto so I could access her eyes.  Wrap the head in a heating pad for a little while to soften the wig glue.  It makes it easy to peel the wig off.

The default eyes are not glued in.  In fact, you could probably just take the old eyes out and put new eyes in without ever having to cut her head open (although cutting open her head makes it easier).  I suspect you could just heat up her head with a heating pad and pop the old eyes out, then pop the new eyes in again from the outside of the head like I did in this Bratzillaz tutorial.  However, you'd be risking scratching her face paint near her eyes if you did that, which is why I chose to open her head and attack the problem from the inside. 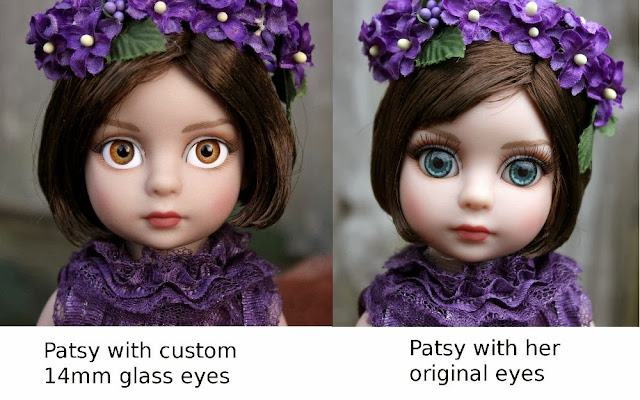 The lady who did the Patsy tutorial uses 16mm eyes, but I like 14mms better.  The 14s are also easier to put in, because the 16s are overall larger in addition to having a larger iris, which makes them really difficult to shove into those eyewells.  (I tried. ... Boy, how I tried!)  The tutorial lady had used half-round eyes, but with the 14mms I was able to use full rounds and they still worked nicely. 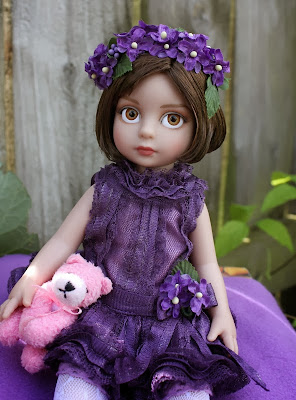 Right now, Patsy's new eyes are being held in quite well without any glue or putty or any extra effort on my part.  They're stuck pretty firmly in the eyewells and won't budge unless I make them.  Technically, I could just leave them unglued so I could change her eyes out again for another color any time I want.  I'm undecided about gluing them, because the idea of being able to change her eyes any time I want to is just too tempting.  I LOVE them like this!  The new eyes have really brought this doll to life.

Omigosh, I love her!

By the way, the whole process of changing out her eyes was really quick and easy.  My only tools were the exacto knife and a heating pad (or hair dryer) to warm up the vinyl.  I didn't alter her face paint at all ... the face paint you see in the pics is all her original factory paint.  Nice, isn't it?  She's really beautifully painted.  The only other thing I did was to get rid of her spidery-looking default applied eyelashes, as you can see in the comparison photos.  The eyelashes just didn't work on her, and she already had nicely-painted eyelashes on the corners of each eye. 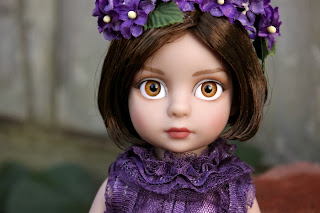 Really, her original eyes probably would look fine if only the factory had positioned them up a bit higher so you could see a little white under them.  The quality of the factory eyes was good; I just wasn't crazy about how the factory workers had set the eyes.

In these pics I was playing with her eye position.  I'm not sure whether I prefer side-glancing or forward-facing, but so long as the eyes stay unglued, I'll be able to change them at whim. 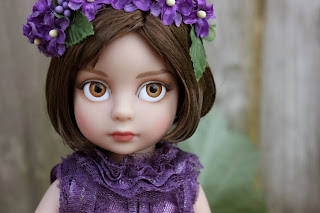 Please click on the pictures to see them larger.
Posted by Me at 6:54 PM