Review of The Zelfs 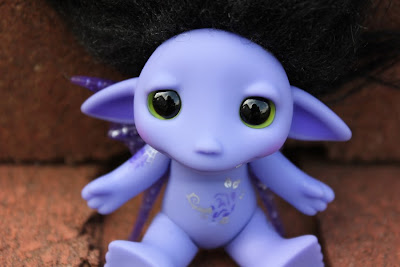 When you first see the Zelfs in the store, your mind immediately goes back to the troll dolls from the '60s and '70s because of the fake fur hair and general body shape.  But that's where the similarities end.  The faces and ears are completely different.  They have movable arms, legs and head.  They have wings, and puppy dog eyes.  They're about 10 times cuter.

These are the medium-sized Zelfs, about 3" tall (7.5cm) to the tops of their heads, not counting the hair.  They're made by an Australian company called Moose Toys.  They have both a larger and a smaller version.  The tiny ones don't have the detail and articulation of the other sizes, and I didn't find them quite as appealing. 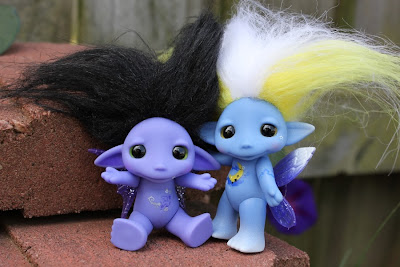 The medium and large Zelfs, though, have a lot of nice-quality details. They have wonderful shading in their paint (notice the shading in the blue one's feet and ears).  The limbs move easily, but stay in place once you move them and aren't too loose.  I tried to gently pry off the wings on one to see if they'd come off, but the wing piece wouldn't budge.  It seemed to be attached pretty securely to the body.

The bodies are made of a type of semi-soft vinyl that is slightly squishy to the touch.  You can press their bellies in slightly.  The wings are an even softer vinyl/plastic.  They have a nice feel to them and don't feel cheap. 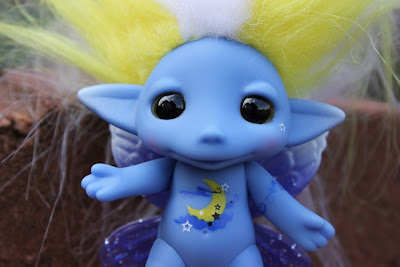 The stencils seem to be applied to the bodies quite nicely.  I'm guessing they might come off with a LOT of scratching, but they don't feel like they're going anywhere anytime soon. 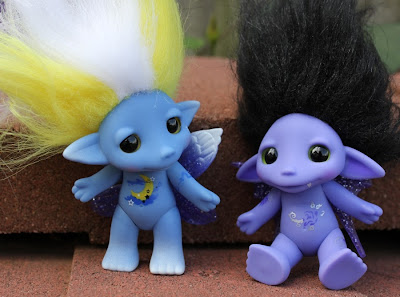 The two I have here are called "Lunanne" (blue) and "Garny" (purple).  They actually have slightly different head sculpts!  Garny's ears are droopier, and her mouth looks a little different.  I love that one has perkier ears than the other!  Not sure if you can see it in the photos, but Garny has green eyes and Lunanne has yellow.  Garny also has a cute fang painted on one side of her mouth that adds a lot to her expression.

These two now have an honored spot right on top of my computer monitor. 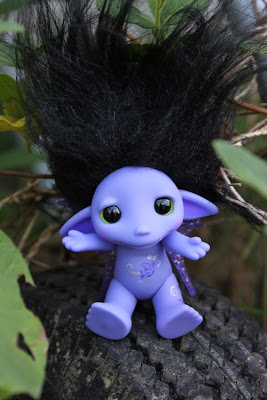 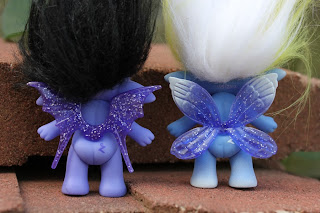 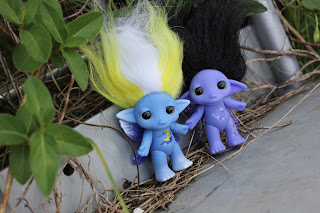 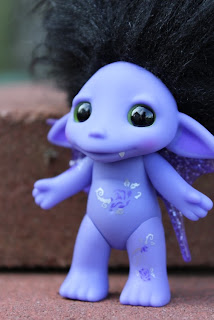 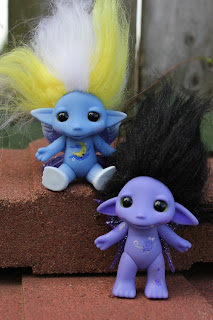