Review of the Wellie Wishers by Mattel

The Wellie Wishers dolls are new for 2016, made by Mattel under the American Girl umbrella. I was completely enchanted by their faces, so I had to get a couple once they made it to my local Toys R Us and I was able to see them in person.
They're being sold at Toys R Us for $60. Much more affordable than an American Girl doll, and every bit as cute. They're 14.5" tall, about the same size as Hearts for Hearts dolls (but more expensive). My TRU was sold out of the blonde and red-haired girls, but had the other three characters. This darling above, Emerson, was actually my first choice, so I was so pleased to see her sitting there on the shelf waiting for me! My second choice was Willa, the (sold-out) redhead. I might have to get her at a later date if I can. She's reportedly the most popular, so I hope I can grab her next time my TRU restocks.  I actually left the store with only Emerson initially, but then a few days later I was at that end of town again for a different errand, and found myself passing by the Toys R Us once more.  I had to go in to get a second girl, the freckle-faced Ashlyn.  Had to.

2) The clothes are cute. I really, really genuinely like the outfits, particularly Emerson's outfit with the striped top. It's a pretty design and looks great. 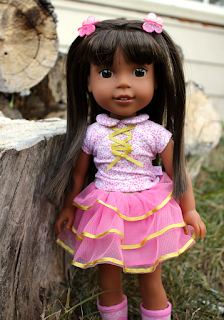 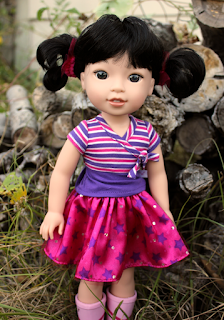 3) The clothing is a nice quality. You can really see the American Girl quality, here. The fabrics are soft and well-sewn, and the inside seams are finished. The shirts have velcro in the back, which is acceptable since it's a child's toy, and the skirts have stretchy elastic waists. They also come with panties!!! Really nice fabric panties, in pale pink. The boots are soft plastic. They're OK, but I'm not crowing about them. 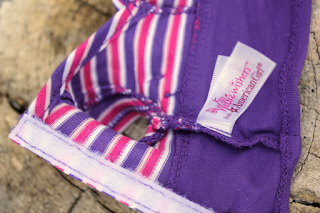 4) The dolls are high-quality, even if the articulation sucks (more on that later). Again, the nice American Girl quality is very apparent in the vinyl used, the face paint, and the eyes. I didn't see any wonky-eyed girls in any of the dolls I saw at Toys R Us. The face paint is perfect, and the eyebrows are detailed and adorable. I was comparing online photos of all five girls, and the eyebrows are not identical on each. I know that's a pretty specific detail to notice, but it shows that they don't all have identical face screenings, which is nice. I noticed that the ones with freckles also have DIFFERENT freckles ... not the same screening. So cute. Apparently they are not all the same head mold, either. Emerson and Ashlyn are definitely different head molds.
5) The wigs are soft, and comparable to an American Girl doll wig. They are wigged, not rooted, so you could technically peel off the wig and replace it with another one if you wanted to, although it would be difficult to peel off. (Warming it up in a heating pad would help soften the glue.) I saw a picture online of Emerson with her hair taken down and put into braids, and it looked so cute. I might do that later if I get tired of this hairstyle, or it gets too messy.
It looks like their wig size would be a 9-10". I wrapped a tape measure around Emerson's head, and it measured almost exactly 10 inches. I suspect a 10-11" wig might be too large, but I'm not going to be taking off Emerson's wig to find out for sure. Just thought I'd mention this in case anyone was interested. 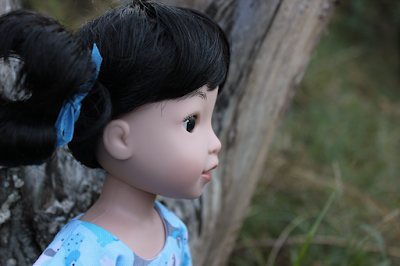 6) The body is all vinyl instead of having a cloth body, so they can wear sundresses with spaghetti straps, and v-neck shirts, and still look amazing. You take this for granted with most dolls, but since American Girl traditionally always had cloth bodies, it's nice to see that their new line does not.
Now for what I dislike about them. There are three things I really don't like:
1. The articulation.
2. The articulation.
3. The articulation.
Argh! When they sit, they sit with their legs splayed VERY far apart, which just looks bad. I have a particular hatred for this time of leg joint, because you can't sit the dolls next to each other when both dolls' legs swing so far apart when they sit. I'd love to pose them sitting next to each other, only it's impossible.

They don't have bending knees, either, but I didn't expect that anyway, so that particular item wasn't an issue with me. Their arms do not move well, either. They don't have a fully rotational shoulder joint, so you can't lift their arms very well upward from the sides, only front to back, if that makes any sense.  In the picture below, I raised Emerson's arms.  They stay up nicely without being floppy, but you can't swing her arms out to the sides.  This is their only raised position, essentially.
To compare them with Hearts for Hearts dolls: the Hearts for Hearts have better jointing and more flexibility at the neck and shoulders, although their hip joints are about the same.

I still love them for their darling faces, though. Their hand sculpts are even cute! Look at the hands! LOOK AT THE HANDS!!! *Keels over from the Cute.*
Anyway, there you have it. I have to go sew some more Wellie Wisher-sized dresses, now.
Later, alligator 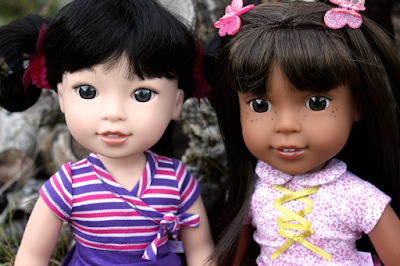 Click on the pictures to make them bigger.
Posted by Me at 9:42 AM