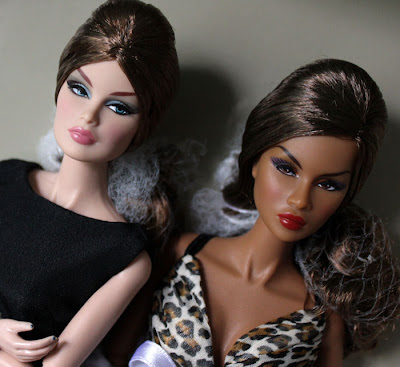 Holy freakin' crap.  I'm not sure whether I want to de-box this set, or build a shrine to it.  I've never had a really amazing two-doll gift set like this before (or ANY two-doll set of any kind).  It comes with the new 2011 Veronique sculpt and the new 2011 Adele sculpt from the Fashion Royalty line.  Scrumptious.  Drool.  Two amazing outfits, and one of them has TWO skirts instead of one.  Tons of jewelry.  Have I sold you on this set yet?  No?  Just wait.  FOUR pairs of shoes (two plastic, two fabric).  A hat like you'd see pictured in a European version of Vogue.  Two necklaces with two really nice earring-and-bracelet sets.  The outfits have separate tops and skirts so they can be mixed-and-matched.  Two pairs of sunglasses, stockings, extra hands and two pairs of panties in fucshia and blue. 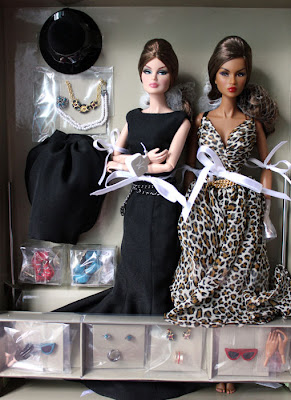 I'd choose grumpy over the sickly-sweet Barbie grin you see in the cheapest playline Mattel dolls.  Still, I like a doll that doesn't look angry.  I think if this sculpt were painted differently, then Adele could be saved from looking crabby.  Perhaps it's just the way they painted the eyebrows?  I don't know.  Adele's expression makes me think someone just stepped on her foot. She's freakin' gorgeous, though.  I'll be thrilled to see future incarnations of her using this face sculpt.  I also love the new Veronique sculpt.  It's elegant and beautiful, and manages to have a surprising amount of expression in the face in all her incarnations so far.

My other, nit-picky, minor dislike:  Their fingernails are painted REALLY weirdly.  The nails are "nude" but with tiny dots of red or dark blue on the end of each fingernail.  Adele has red; Vero has blue.  It's really, really ugly and at first I thought it was a factory mistake until I saw that both dolls were painted like that.  I've never been tempted to re-paint doll fingernails before, but am considering it for the first time. Veronique has dark blue toenails. Ack!  I wish they'd just left fingers and toes unpainted.

For those who don't know, this was a gift set sold at Integrity Toys' 2011 "Jet Set" convention held two weeks ago. 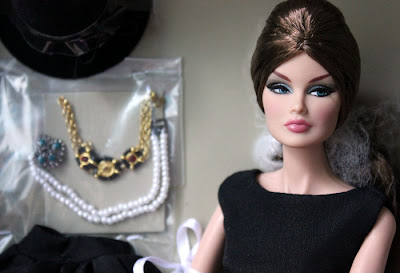 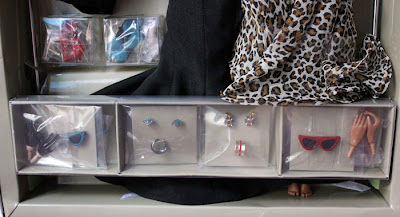