Please meet Pamela, Diana and Harleen.
Otherwise known as Poison Ivy, Wonder Woman and Harley Quinn.
The DC Super Hero Girls dolls officially debuted yesterday, February 28th, as a Target exclusive.  There were a few stores here and there that released them ahead of the official Feb. 28 shelf date, but they were few and far between.  I went to Target to see them in person, and whatdaya know ... they'd devoted a whole endcap to them. At $20 apiece, though, I didn't feel I should buy all six characters at once, so three came home with me and three stayed. 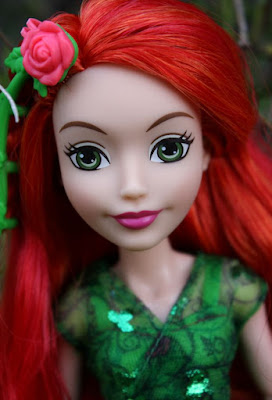 By the time I got home with them, all of the characters were sold out on Target.com online except for one. SOLD OUT. Freaking sold out on the first day they were available. I have a feeling I should have grabbed those last three characters while I had the chance. The one last holdout that didn't sell out on the first day, Bumblebee, was sold out by the following morning.
They're Mattel dolls, though, and when Mattel finds a toy line that sells, they keep on producing it. So I'm very sure that even if the initial dolls sell out completely, there will be many more in later shipments.
So yeah ... wow. Sold out online in the first 24 hours is insane. Congrats, Mattel.


So here are my three prizes, and my review. 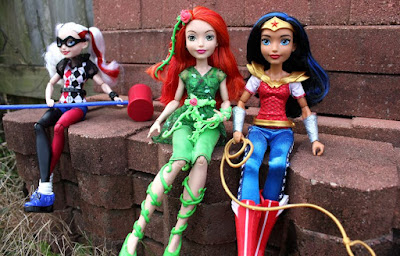 First off, the articulation is great. Better than Monster High. They have bending elbows, wrists and knees like Monster High dolls, but the joints are a nicer quality and don't feel loose. The DC Super Hero Girls can sit up nicely with their thighs together, and stay in position wonderfully without flopping. I'm super excited about this body and give it an A+, which is a first for me for a Mattel doll. 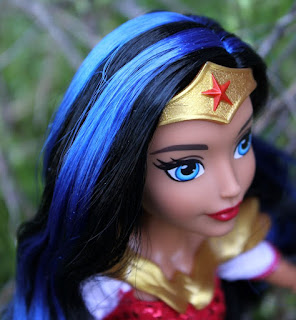 I love that the bodies aren't too skinny, and look muscular. Love it!!! The hair is soft and fine, too, with unique details. Wonder Woman has blue streaks in her hair to reflect her comic book roots. I thought Poison Ivy's hair was solid red at first, but it's actually a rich mix of red and orange hairs. 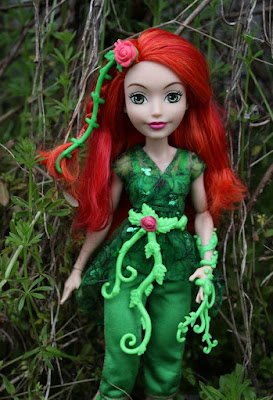 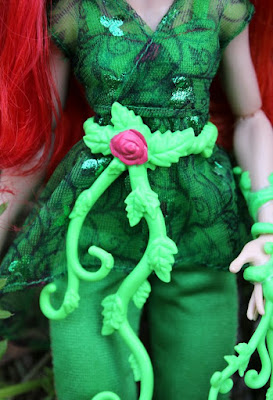 Speaking of Ivy, the fabric of her dress is wonderful. It's a see-through rose leaf print fabric over solid green. I'm not so in love with her hair accessory. I think it could have been done better. I want to replace it with some fake mini-vines from a craft store. 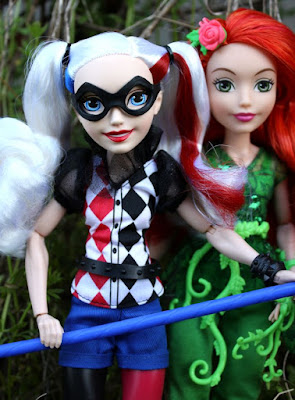 Harley Quinn has some details that are disappointing, but overall she's great. She was obviously never meant to be redressed, as her tights are painted on, not fabric. The design on her shirt is printed, but the fabrics used for her clothing (and the clothing on all the dolls) is a much nicer quality than expected. I honestly expected cheap-quality fabrics like you see on many playline Barbie dolls, but these fabrics feel nice and are sewn well. 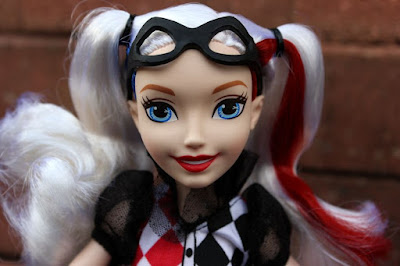 Her mask is removable. I lifted it up to see if there was any staining or marks under the mask. Nope. The mask is held onto her face with tiny plastic ties on either side of her head, but you could snip them if you wanted to, to take the mask off completely. 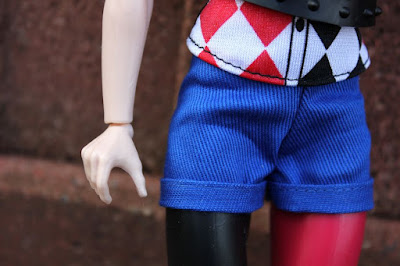 I can't even tell you how much I love that Harley comes with a giant mallet. LOL! Her hands grip the mallet firmly so that she can hold it nicely without the mallet falling down, but unfortunately, it means her fingers are permanently stuck in a curled claw position. It makes her hands look awkward if you take the mallet away from her. Wonder Woman has the same issue. Her hands are curled to hold her lariat, and look awkward once you take the lariat away. I wish these dolls had come with an extra set of normal hands so you can switch them out, but there are no extra hands. Mattel totally could have done it, as their hands ARE removable. You can pop the hands out of the wrists and back in again. Perhaps it was a child safety issue because of the small parts. I don't know. 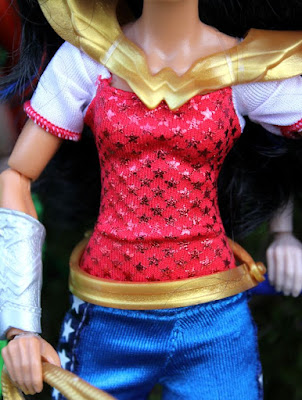 Wonder Woman has some great detail on the fabric of her shirt, and the stars down each leg of her pants. Her silver cuffs have some really ornate molding detailing. I noticed the cuffs are actually not removable unless you pop her hands off first in order to slide the cuffs off. I'm totally OK with this, because it means the cuffs won't fall off accidentally and get lost. Although the hands come off, they are held in fairly tightly. They won't be sliding out of their wrist sockets unless you want them to and intentionally pull them. 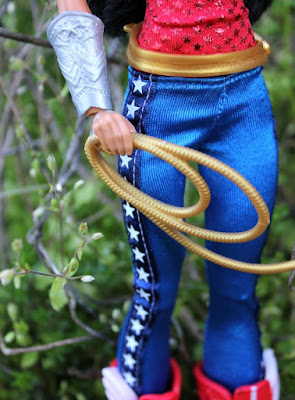 So that was my long and enthusiastic review. It looks like Mattel has a second series of these dolls planned in which they'll be adding the characters Katana, Catwoman, Cheetah, Hal Jordan, Beast Boy, Star Sapphire and Hawkgirl. I'd love to see a future varation of Poison Ivy where she has green skin and lips, but that's not on the table yet.
By the way, I mentioned that these dolls were a Target exclusive, but I saw a rumor that they won't remain an exclusive forever, and will be sold in other stores eventually. I don't know how long they'll be Target exclusives. If I find out, I'll re-edit this post with the new information.  I did just find out that they'll be available internationally in July, but haven't discovered whether this means just overseas Target stores, or other stores as well.

EDIT:  I've discovered they're going to be in other stores besides Target in July as well, in addition to being sold internationally in July.  It looks like in July they'll be pretty much global.
Arrivederci! 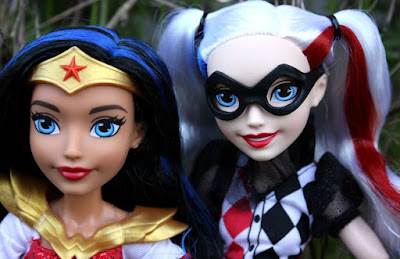 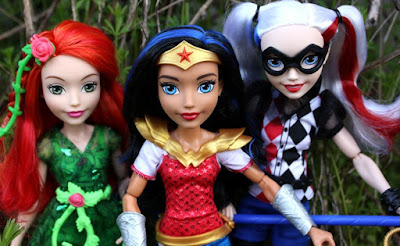 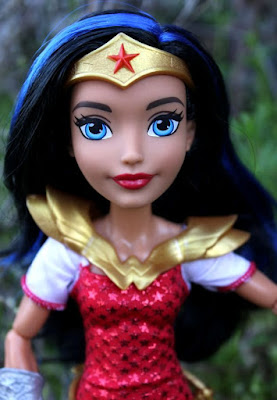 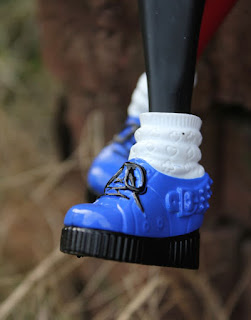