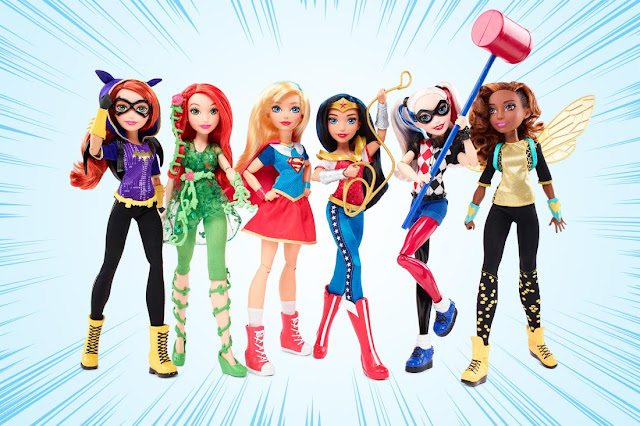 Mattel collaborated with DC Comics to do a series of comic book heroine and villain dolls called the DC Super Hero Girls. They'll be 12 inches tall and have bending elbows and knees, and possibly bending wrists, too.
I like that they aren't hyper-sexualized. The faces are beautiful. The costumes look good without being skimpy. I looked on their website, and it looks like a later series will include the villains Cheetah and Catwoman (yay for both!), as well as the characters Star Sapphire, Hawk Girl and Hal Jordan. Wait a minute ... Hal Jordan? *Looks around.* I guess they aren't just limiting themselves to girls in this line. Will he be called a "Super Hero Boy?" Because if the ladies are called "girls," but the males are called "men" instead of "boys," I'll be a tad upset.
The line's background story is the now-predictable Mattel staple that all these characters are attending the same high school together. Hmmm. ... Where have we seen THAT theme before? But the dolls are delightful, though. And since I've been a Wonder Woman fan since I was a kid, I can't wait to get their Wonder Woman character. SHE WILL BE MINE!!!
There will also be a 6-inch series of action figures with molded plastic hair, and bending elbows and knees.
Posted by Me at 11:00 AM