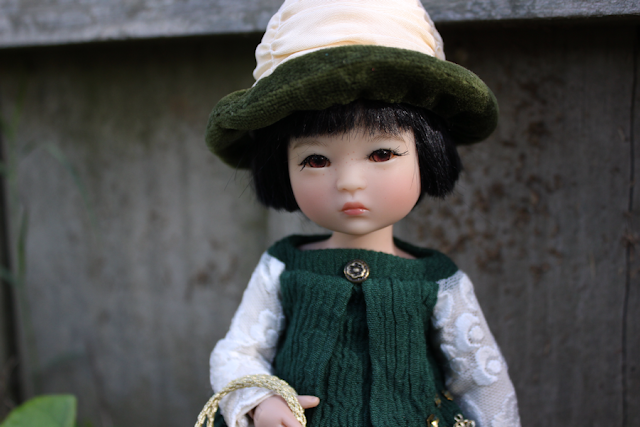 I was lucky enough to get this lovely little girl in a trade.  (Thanks, Deb!)  My new little girl is Ten Ping by Ruby Red Galleria.  Or, more specifically, she's a version of the Ten Ping sculpt reinvisioned as a Malaysian girl named Mia, part of Ruby Red's Four Kindergartner doll series.  She's one of the sold out editions, so I feel particularly lucky to get her.

Here's a little bit about the dolls:  As of July 2015, there have been 8 versions of the Ten Ping sculpt as the character Ten Ping.  There have also been three separate offerings of the "Four Kindergartner" dolls, with four dolls in each set, all with the Ten Ping sculpt but representing different characters (Miki from Japan, Jar-Lu from China, Ishara from India and Mia from Malaysia).  Plus now there is a new (and very beautiful!) sculpt for the Ten Ping line, a smiling girl named GiGi who is designated as Ten Ping's best friend.  GiGi is sold out everywhere as far as I know (I could be wrong).  I'd love to get a little girl with the GiGi sculpt some day! 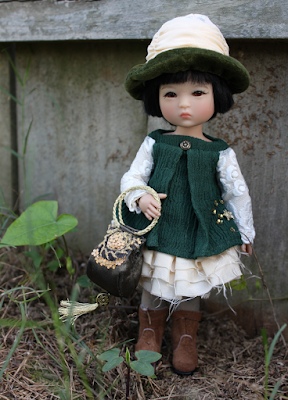 My Mia was apparently the first Mia produced for the original Four Kindergartner line in 2013.  I love her hat and her sweet little face!  It's very apparent that the entire doll was made with care and attention to detail.  She even comes with separate panties as well as tights, which is so nice for redressing.  So many dolls will come with one or the other, but not both. 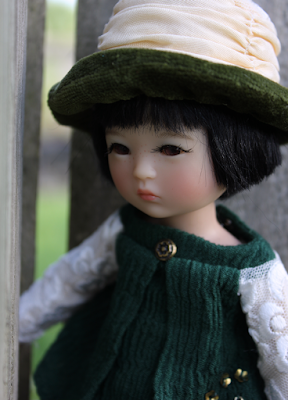 There are so many nice little touches that I'm not sure I can even go through them all.  The doll herself has little delicately hand-painted freckles, and applied eyelashes that are set just right.

The handbag is a rich, dark green satin to go with her outfit, with a gold embroidered design.  It's a functional bag, and really opens. 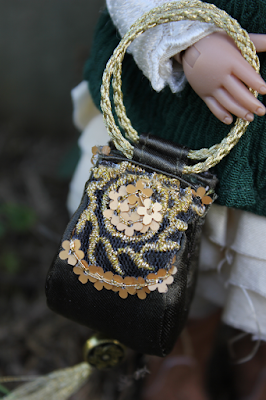 I absolutely love the hat.  It has cream lace just on the crown, and is the sweetest design!  It has shirring around the outside and a brim of dark green velvet, and is fully lined. 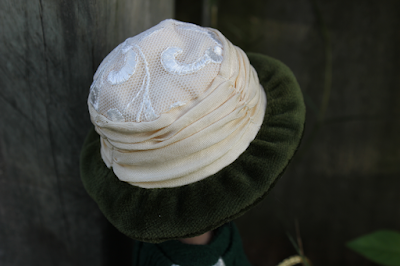 The dress on this edition is all one piece (no separate shirt or skirt).  It is fully lined in a cream cotton, and closes in the back with hooks.  I've seen other editions of Ten Ping where the dress is in several separate pieces (a separate shirt and overdress, for example). 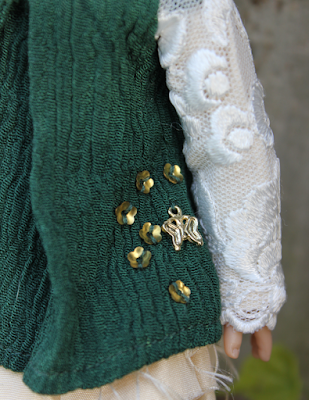 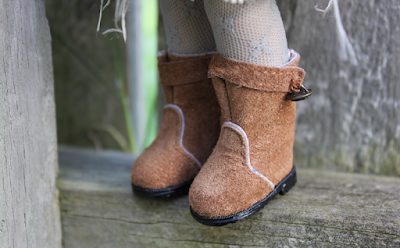 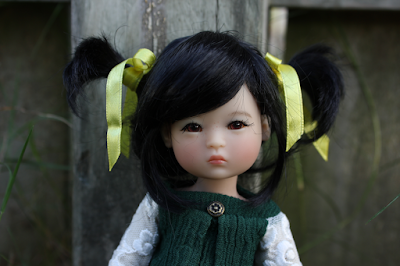 By the way, I discovered the 30mm Monique Elegant Ankle Strap shoes fit her perfectly, even with socks or tights on.  I bought four pairs of these in different colors, and they all fit.  The picture on the web site shows them as glitter shoes, but the 30mm size doesn't have glitter.  You can find them here.  Weirdly, I also tried the 30mm Monique Lace-Up Boots on her, but they were slightly too tight!  I guess it just depends on the shoe.  If I could find boots in a 32mm, that might be perfect.

EDIT:  I just discovered another web site (an eBay store, this time) that sells a large selection of 30mm and 31mm-sized doll shoes.  They're called Juju's Dolly Mall.  You can find their 30mm shoes here and their 31mm shoes here.

To see my post with pictures of Ten Ping's jointing and articulation, please click here.
Posted by Me at 12:19 PM