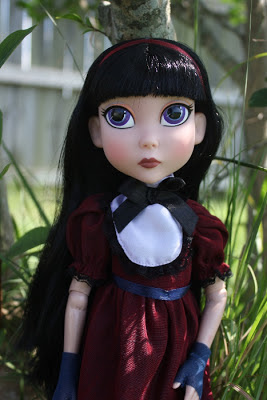 Now for a break from Poppy Parkers!  At least for a day.

This is Maudlynne Macabre, from Tonner Toys.  I've been wanting one for months and months (she debuted late 2012), but only just now decided to take the plunge.  Tonner was having a 15% off and free shipping week, so I no longer had any excuses not to get her.  She arrived today.  Wouldn't you know it, though. ... Three days after I bought her, Tonner put Maudlynne on sale for an even steeper discount.  Sigh.  Of course.

Anyway, she's mournful and cute, and in some ways reminds me of myself when I was a little girl.  My hair looked just like that as a kid, for one.  Black.  Bangs.  Long straight hair in back.  Yup.  I spent the entire first part of my life with that look.  Also, her backstory is that she's supposedly from upstate New York.  Me, too!  (Grew up in Binghamton.)  I never dressed in Victorian Gothic, though.  Maybe I should have.  I would have rocked the Wednesday Addams look.

She uses the Tonner LittleMissMatched Girls' body, so she can share clothing and shoes.  She's sort of a cartoony version of Tonner's earlier Agnes Dreary doll, who was very Wednesday Addams, herself.  I love that despite the Gothy appearance, Maud's not dressed in the predictable black.  Nice.

She has dark navy blue tights.  I took them off to check for staining, and there wasn't any.  Yay!  Her dress is nicely sewn for a playline doll, and the fabric is soft and nice.  It fastens with velcro.  The black mary jane shoes are made of super-squishy plastic and are easy to get on and off the doll.  She doesn't have a slip or panties, but you wouldn't expect a doll with tights to also have panties, anyway.  She doesn't come with any jewelry, and her ears are not pierced.

Some other reviewers have noted she has bending elbows and knees, but not wrists and ankles.  I do think bending wrists would have been nicer for posing, but she still has more jointing than most Barbies.  I couldn't care less about jointed ankles, but someone else pointed out that jointed ankles would make it easier to dress her in long pants.  I have no intention of dressing my girl in pants, so I didn't even think about this.  She was right, though.

I would love to see more versions of Maudlynne.  I'd love to see a brown- or green-eyed version (Debut Maudlynne's eyes are purple), and a version without bangs.   Maybe with long curly hair and no bangs.  That would be darling. 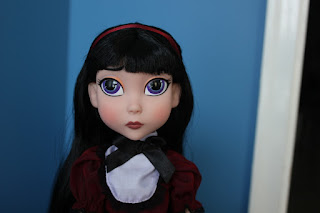 The Tonner Doll Company was at Toy Fair this year.  They showed a prototype of a blonde version of the Maudlynne Macabre sculpt with an absolutely beautiful, frilly Victorian dress.  It's supposedly a new character, though, not merely a blonde Maudlynne.  The character is supposed to be Maud's friend Victoria, who is a ghost.  Here are links to pictures of the blonde prototype doll here and here and here.  I really hope she isn't produced with the exact same face as Maudlynne!  They should at least give her a new eye screening so she does look like a new character, and not just a blonde version of Maud.  She's lovely, though.  I hope they at LEAST change her eye color.

I guess no review would be complete without mentioning her hair.  The hair is silky soft saran!  Yay again!  It feels really wonderful, and I already want to braid it. 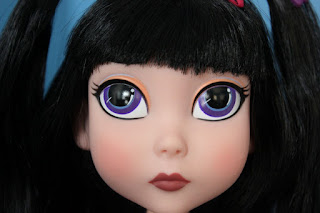 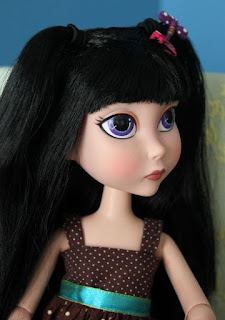 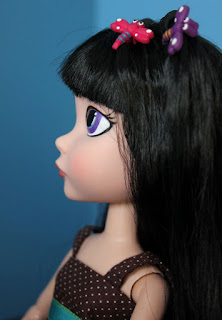 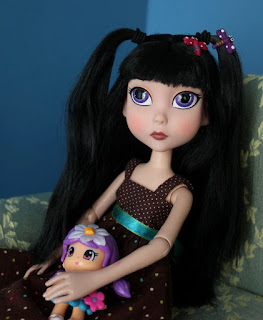