Review of the new Target Pinypons 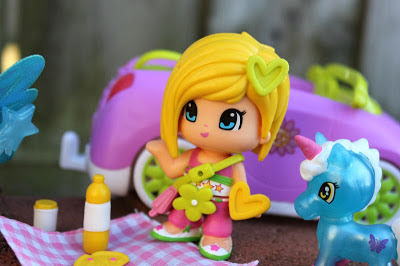 Target stores have just started carrying Pinypons.  We (my 5-year-old and I) played with two of the sets today.  One was a car set that came with a yellow-haired Piny, a purple car, and a picnic basket with a themed set of dinner items.  Apparently Pinys like to eat pizza when they picnic!  ;) The other set we opened was one of their new fairy sets, which came with a blue-haired fairy and a translucent unicorn with a mane that looked like whipped cream. 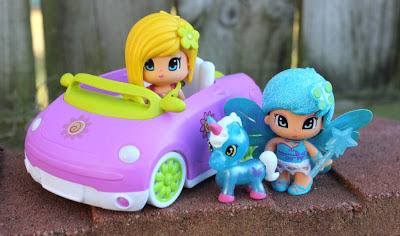 If you haven't seen these before, the hair is all interchangeable, their bodies twist off at both the waist and the neck so they can exchange upper and lower body parts, and the heads even turn around to reveal a second, alternate face on the backsides (covered up by the hair).  They're only 7cm tall (a shade under 3").  They come with tiny accessories like hearts, flowers, stars and butterflies that you can stick on them at various places ... also interchangeable.  They aren't suitable for a toddler who still puts things in his mouth, but my 5-year-old loves them. 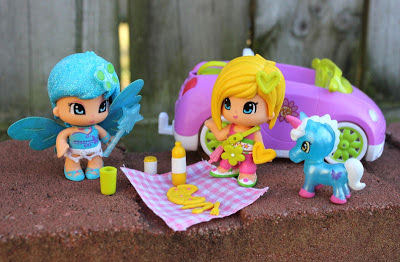 The fairy has removable wings, which is something I didn't expect.  It's a nice touch.  The glitter hair was driving me crazy (small amounts of glitter on the fingers if you touch it directly), but my daughter Eva liked it.  I asked her which she liked better, glittery hair or the regular hair, and she claimed to like both equally.  The unicorn's head turns. 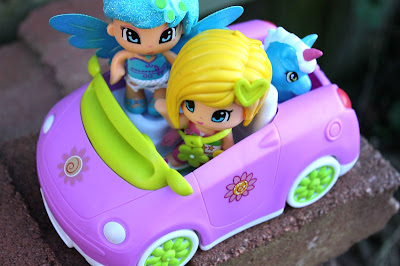 My daughter was really enchanted with the picnic set, and wanted to play with that right away.  I have to say, the car is SO CUTE.  It has flowery wheels, seats up to three Pinys and is sturdy ... really nicely-made.  It's not a piece of cheap junk that's going to fall apart after five hours of play.  The Pinypons are nicely-made, too, but have a zillion itty-bitty accessories that would get lost in a heartbeat if they weren't kept together in one box.  At my house, I've designated a big purple plastic box as "The Pinypon Box," and that's been working so far to keep everything together.  Thank goodness, because my girl is pretty messy!
I photographed their alternate faces as well so you could see them.  I adore the blonde's alternate face.  She looks like a cheerleader in mid-cheer, or something.  LOL.  This might be the single happiest doll on the planet.  Her shoulder bag is removable as well, by the way, if you twist off her head.  As I said, the heads are meant to come off, but at the same time, they are fitted well enough that they won't fall off on their own during play.  You have to twist the head and apply a little pressure to get them off, which is pretty much perfect.  You don't have to worry about rolling heads traumatizing your preschooler.  LOL.  At this point, we have 16 Pinypons (Eva got a bunch for Christmas), and only one of them has a loose head.

I have an unopened pink fairy set to use as my very first blog giveaway!  More on that in a later post, so please check back later to sign up for the giveaway.  You can see the picture of the giveaway prize down below.  ;)