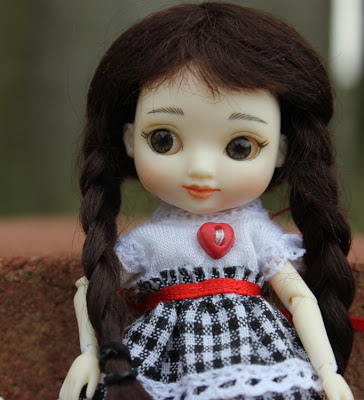 She's been around for a couple years now, but in case you've never seen one in person, I'll tell you about her.

She has a changeable wig and eyes.  Underneath her wig she has an easy-to-open headcap held on with magnets.  Her eyes are held in with putty inside the hollow head.  The very first thing I did when I got my Amelia Thimble was to re-position her eyes to be side-glancing.  ... I had to use a toothpick to help me, since her head is so tiny! 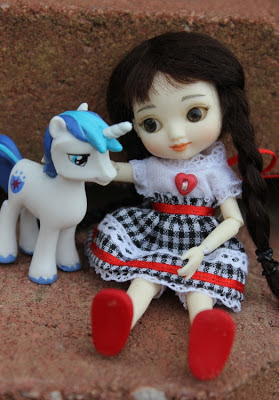 This particular Amelia is from 2011 and called "Cute as a Button."  It's sold out on the Wilde Imagination web site, but still available on eBay.  I adore her dress: It's sewn well and a nice quality, and comes with separate bloomers underneath.  Her default curly wig was too frou-frou for my taste, so I pretty much immediately switched her to this braided "Heidi" wig by Kemper (size 2-3" medium brown).  Her shoes are plastic and not anything special, but they fit her feet well.  The shoes didn't stain at all, despite being red.  She actually was packaged wearing her black wig and red shoes in the box, and there was not a single stain on her!

Her eye size is 6mm, in round or half-rounds.  I've heard oval eyes won't fit in her eyewells.  The acrylic eyes in these photos are the ones she came with, and as you can see, they're quite pretty.

It's unbelievable how tiny this girl is!  She's dollhouse-sized.  In these pics she's posing with a Mini My Little Pony unicorn.  She's also a good size to utilize the accessories that come with Mini Lalaloopsies, and of course, dollhouse furniture and things.

The last photo is meant to give you an inkling of how small she is.  I've posed her next to a Pinypon and a Mini Lalaloopsy.  Yes, the censoring is silly, but you know how people are.  I didn't want the blog hosting site to see the picture and yell "Eeee!!! Naked resin!!!" and close down my blog.  LOL. 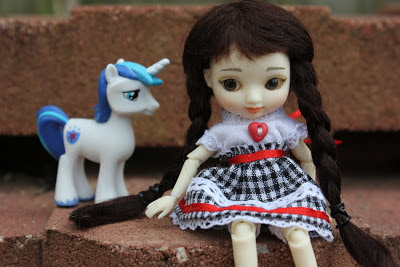 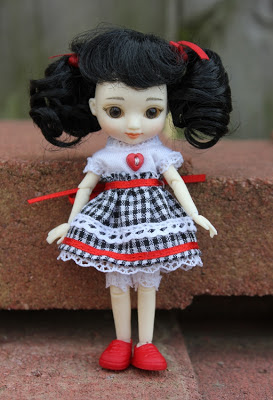