Bratzillaz on sale at Target; Barbie stuff 15% off 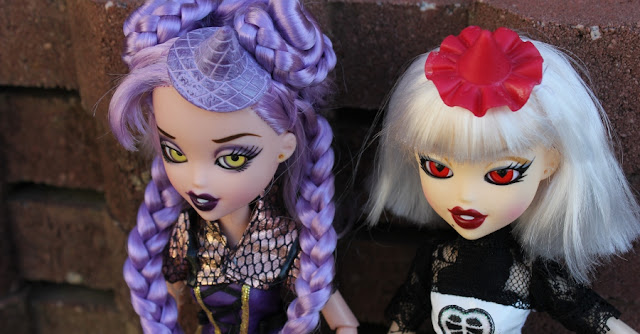 Bratzillaz were one of those dolls I'd always found intriguing, but never bought before.  I just saw these on sale for half off(!) at Target this week, so two of them ended up coming home with me.  50% off ain't bad!  The Barbie stuff is all 15% off this week at Target, too, so you might want to check the Mattel aisle out as well.

I always liked these two the best, but particularly the purple-haired witch.  Love her or hate her, you at least have to admit she has personality!

The Bratzillaz I bought have bending elbows, wrists, and knees.  This makes them really posable and fun.  The inset eyes are glass.  The dolls have tattoos (LOL) and Gothy outfits that I like for their weirdness.  Their hair is a pretty bad quality: stiff and cheap.  (Note: These two are from the original series; I've heard the newer Bratzillaz have better hair.)  The earrings are cheap plastic and a terrible quality (but you can say the same about Mattel earrings).   I think the earrings on these two were quite ugly, actually, and ended up taking them off.  The quality of the outfits themselves are OK and about on par with playline Barbie clothes.  ... Even better than many of the lower-end Barbie clothing, actually.  The shoes are a soft plastic and are easy to remove, and not bad for a play doll. They have real feet under those boots, not detachable feet like other Bratz dolls.

There are a couple of different kinds of Bratzillaz.  There is actually a line of cheaper Bratzillaz that have painted eyes instead of inset glass eyes.  I don't think they're half as cute as the ones with inset eyes, personally, and their jointing is different.  They aren't as articulated as the more expensive ones. ... The cheap ones don't have any jointing in their arms, for one.

My two would be so fun for Halloween!  The white-haired lady is called Jade J'Adore (Jade? She doesn't have a single bit of green on her!  They should have named her Ruby.)  The lavender-haired girl is Yasmina Clairvoya.  I like them a lot more than I even expected to, now that I've deboxed and photographed them. I may get another one at some point.

Jade's outfit looks like a cross between a nurse's uniform and a witch costume.  The first time I ever saw her I actually thought she was supposed to be a Gothic nurse.  LOL.  If she had a nurse's hat it would just be too perfect.  She came with a black veil over her eyes, but it lifted off easily and there wasn't any staining.

I had to take off their cloaks and earrings.  It was just all too much.  Sometimes less is more, ya know?  I like them even better without those superfluous extras.