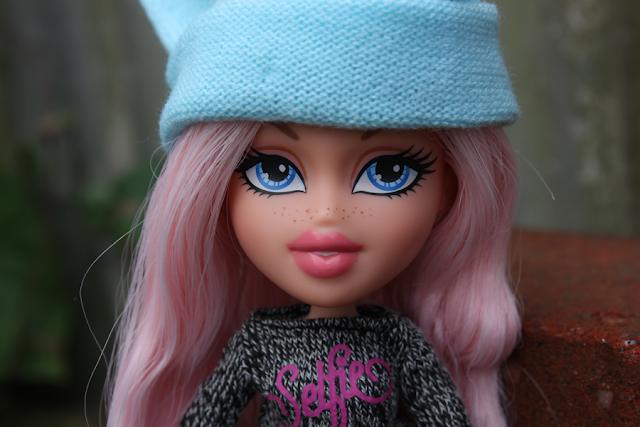 I told myself I wouldn't buy one of these.

My initial reactions to the new, revamped 2015 Bratz line were negative.  Their proportions looked weird to me.  Their heads and feet are now even bigger in relation to their super-short torsos, which makes their bodies look even more disproportionate than they used to.  It makes them look less human and more alien ... or, if I want to give it a nice spin, it makes them look more "fairy-like."  Yeah, that sounds nicer.  Let's go with that.

Yet there were some things I liked about the new dolls.  Against my better judgement I ended up buying one anyway, because I was dying to see one up close and review it.  A couple of years ago, I was gushing about how awesome the Bratz were, so despite my initial negative view of the 2015 collection, I wanted to give them another chance. 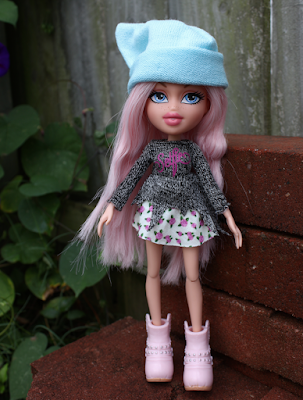 I chose the only pink-haired lady, because I have a weakness for cotton candy-colored hair.  The hair is really nice.  It's soft and doesn't feel cheap or stiff.  This particular doll is called #SelfieSnaps Cloe.  Yes, they actually put the hashtag in there, apparently because every single thing made for the under-25 crowd has to have a hashtag now.

I've come to the conclusion I like to see her standing more than sitting, because when she sits, it's painfully obvious how short her torso is compared to her um ... generous head size.  She CAN stand on her own ... barely.  I have a feeling that some Bratz won't be able to stand and some will, and it'll be completely dependent on what kind of shoes she's wearing.  Not that she HAS to be able to stand.  There are a million brands of doll that can't stand on their own, but are wonderful to buy, anyway.  (*Cough* Barbie *Cough.*)  I just thought I'd mention it. She CAN sit nicely, because she has bending knees.  I love this!  It's one of the few features on the new line that I really, genuinely love.  The knees have simple, hinge joints and when you bend them, they hold their position quite nicely.  Her arms are not articulated, though, so they pretty much just hang in this awkward position no matter whether she's standing or sitting.  Really, elbow joints would have made such a huge difference.  Sigh.

I was also disappointed to see that she can barely look up or down, mainly only side-to-side.  If you try to make her look up, the head moves barely a centimeter, and then only if you force it. 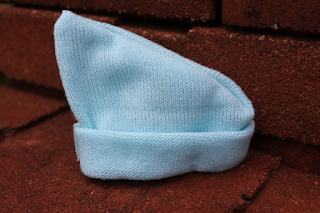 This one came with a knit hat cut in an unusual, elfin shape.  It's like a cute little Smurf hat.  I'm not sure why the hat is so much taller on one end.  Are hats like this trendy now?  I have no idea.  It makes me want to sit in my rocking chair and scream for people to get off my lawn.  I like the hat, though, and the fabric is soft and a nice quality. 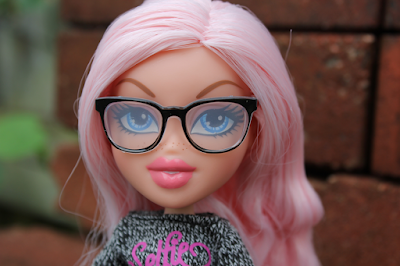 She also came with black eyeglasses.  I love that!  They have plastic lenses, but the lenses look a little foggy.  I wasn't digging how she looked in her glasses at first, but the more I look at her in them, the more I like them.  I'm glad they're eyeglasses and not the more predictable sunglasses that every fashion doll seems to have. 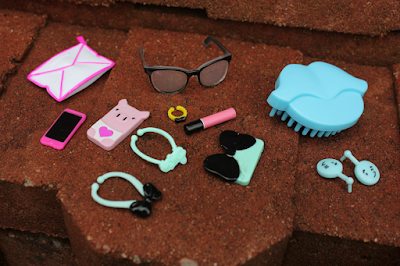 All the new Bratz dolls come with a bunch of accessories, which is kind of fun.  This one came with a cell phone, and the phone has two different cases you can put it in:  one that looks like a pig (cute!) and one with a bow on it.  The blue hair brush she comes with is hulky and awkward-looking, with the shape of lips on the backside and super-thick plastic bristles.  I would rather have seen a comb than this chunky thing.  The rest of the accessories are less interesting.  The necklaces are cheap-looking and don't look good on the doll.  The clutch purse is unattractive, and doesn't open. 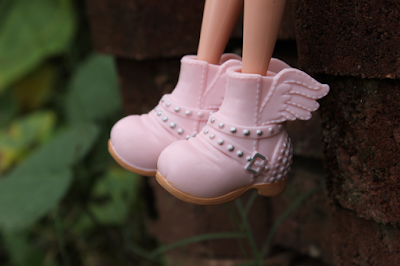 I do like the clothes on this one and indeed, the whole line.  One of the strengths of the 2015 Bratz is that their clothes are pretty nicely-designed and look good, in my opinion.  They're sewn and finished like typical play doll clothes, but they're cute and the fabrics used are decent.

I really like the shoes on #SelfieSnaps Cloe.  You can't go wrong with winged shoes, ya know?  The feet are still detachable, like previous Bratz incarnations, but when the shoes are this adorable, I don't mind.  The details on the shoes are great. 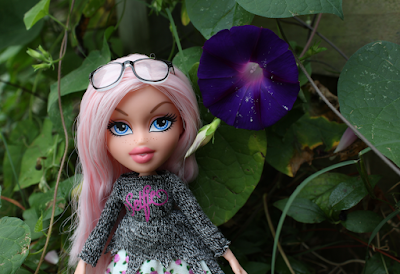 Despite the positive things I've said here, I'm still not sold on this new line of Bratz dolls.  The proportions still bug me, although I can see getting used to them after a while.  I think they would have been really nice dolls if only their torsos were larger/longer in proportion to their heads, or their heads and feet were shrunk again to their pre-2015 sizes.  I just don't understand why MGA Entertainment felt the heads and feet needed to be even bigger.  I can't imagine a board meeting where they would have gathered to discuss how to refresh the line, only to say, "I know what will save the line. ... Let's make the head and feet EVEN BIGGER!!!  And we'll give all the dolls iPhones."  (*Sound of applause and pats on the back.*)

Email ThisBlogThis!Share to TwitterShare to FacebookShare to Pinterest
Labels: Bratz