It's been a while since I've shown an Integrity Toys doll here, so I was thrilled when my pre-ordered Incognito Elsa Lin was dropped off at my doorstep.  She's part of the 2015 FR16 line, and the only one in the line I ordered.  I'm super in love with her ... except for the hair, which I'll tell you about in a minute.


She came in a really lovely yellow shell top that fastens with hooks in the back, and a light gray skirt with a scandalously-high slit in it.  Her shoes are simple ivory pumps, which I LOVE because sometimes Integrity does these insanely-complicated shoes that are impossible to put on the doll.  I'd rather have something simple that I can put on and take off easily.  They fit well and look nice.


She came with sunglasses (arrived broken in the package), a really pretty scarf in a nice print, a bulky jacket, a brown purse and some super lovely jewelry.  I have to say, Integrity does gorgeous doll jewelry!  The earrings looks like gold leaves, and there is a matching gold bracelet.  There are an additional two bracelets that match her orange-red lipstick.   Love the jewelry; dislike the jacket.  It's just thick and bulky, like I said, and in my opinion doesn't look good on the doll.  It might look nice life-sized, on a live human model, but the thickness doesn't work quite so well doll-scale. 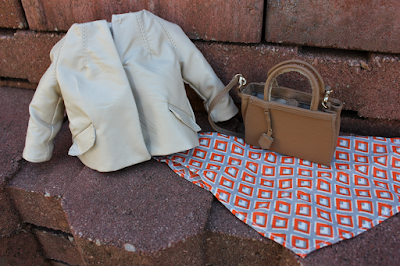 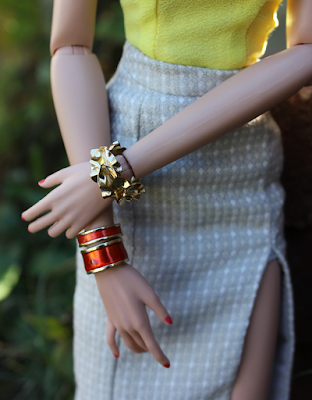 Anyway, I mentioned the hair.  The promo pics of this doll only showed the hair from the front, and in the promo pics, the bump on top of the head was smaller.  On my doll the bump was HUGE.  It actually looked OK from the front, but when I saw her from the side, I pretty much said "What the actual heck?" to myself and gnashed my teeth.  The back of the hair was in a ponytail, which looked really strange coupled with the '60s bump.  (I've seen it called a "bitch bump" on a couple of forums.  LOL.)  I don't know why they decided to pair a ponytail with a B-bump, but it does NOT work for me.  That thing had to come down.

So I loosened the hair gel by dipping the top of her head in hot water, then went to work.  Luckily, the hair underneath the bump was one big, long curl of hair that unwound nicely, so I'm pleased to say she's fully rooted under there!  However, there ARE a few strands of hair that are cut short, but they're behind the hairline.  I'm not going to bother rerooting these, because they aren't too numerous, and with her hair down they just blend in with the rest of the hair anyway.

Here she is with her hair loose and sexy, redressed into an older Tyler Wentworth outfit by Robert Tonner called "Fragrance Launch."  Her hair is not pure black, but instead that gorgeous shade of darkest brown that is almost black, but not quite.

Anyway, hope you enjoy the pictures.  Please click on the photos to make them bigger.

Email ThisBlogThis!Share to TwitterShare to FacebookShare to Pinterest
Labels: FR:16