More on Pinypons, plus My Little Pony

When I wrote the first post about Pinypons, I had NO IDEA they had alternate faces on the backs of their heads!  My daughter discovered it, which just goes to show you sometimes daughters are more observant than their mommies.  LOL.  You can lift off the Pinypon's hair and turn her head around to show a different face on the back of the head.  After learning this, I went back to Target to get a couple more of these little cuties (still on sale at $2.50, luckily).  I took a couple of pictures to show you what they look like with their alternate faces.  My daughter has now adopted my Pinypon family as her own.  If she'd just share them with me once in awhile, that would be great.  LOL. 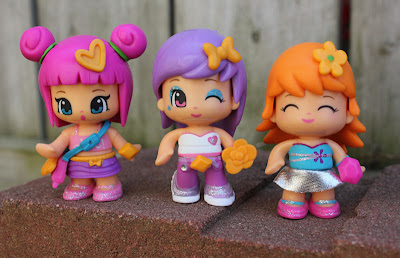 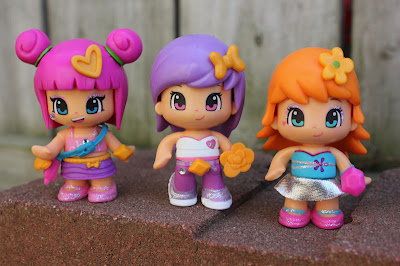 On a different subject ...
The last time I visited my (40-year-old) brother, he was telling me some anecdote about My Little Ponies and their fans.  He's not a Pony fan, but found it interesting.  I decided to get him a My Little Pony as a gag gift ... and ended up buying two for myself.  Aarrghhh!!!  I need an intervention program to protect myself from buying adorable little plastic nonsense.  Hee hee!  These are the two I got for myself.  The Pony I bought for my brother is white with an ice cream sundae branded on its rear. 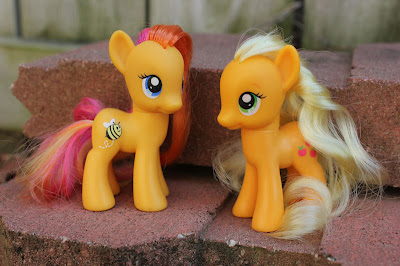 I have to wonder, though ... why did the My Little Pony company (Hasbro) decide to change the faces to this more anime-ish sculpt?  The sculpts used to be cuter!  I've really had a hard time liking the new/current sculpt(s), but they're growing on me.  I realize this sculpt change is old news to MLP fans, but I thought I'd mention it.  Why fix it if it ain't broke?  Eh?

Since I've been totally ignorant of the history of My Little Ponies (a VERY important historical topic!), I decided to research them for a few minutes.  Apparently, the older sculpt I knew and loved was what MLP fans call the "3rd Generation sculpt."  The new sculpts are meant to look more like the characters in the newest cartoon series.  Hmmm.   You can see a short but illustrated history of the MLPs on this web site, if you're interested.