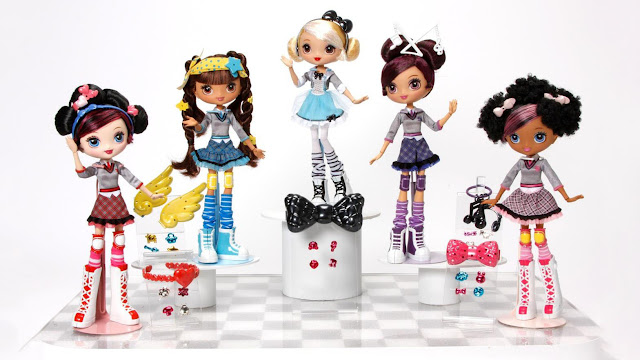 I just found this promotional picture of the upcoming Kuu Kuu Harajuku dolls.  They'll be released in Spring 2017.  They're inspired by a cartoon of the same name that was produced by Gwen Stefani, about a girl band.  I think these new dolls are so cute, with their exaggerated, cartoonish look.  I like that there are different skin tones.  Gwen Stefani did a different doll line some years ago that I didn't like at all, but I'll definitely keep my eye out for these new girls.  It seems like they'll have bending elbows, wrists and knees, judging from this photo, but I can't say for sure yet.  I hope they'll come with the stands.

Apparently the new Bratz dolls didn't get quite the warm reception and mega sales that MGA Entertainment expected, so they're being discontinued again.  If you want any of the current dolls, you'd better grab them now before they disappear off the shelves.  I have no idea whether MGA will attempt to release new versions again later, or if they're discontinued for good.