I thought I'd show you two different types of doll food today. The first is a handmade dinner for your more refined dollies by Chef Gina, shown here on a table and chairs made by the Tonner Doll Company for their 10" Patsy-sized dolls. For lunch we have stuffed pierogis with glazed carrots and salad, washed down with iced tea with lemon, with yogurt for dessert. There is a separate large salad bowl, with a helping of fresh greens divided onto each plate. The plate is ceramic, not plastic.  (Remember to click on the photos if you want to see them bigger.) 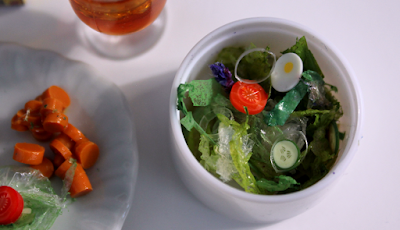 The tomatoes look amazing. It also looks like there are thin slivers of onion ring in the salad, a slice of egg, and cucumber. I don't know what Chef Gina used to make these with, but they're so much nicer than play food you can buy at Target. But since they're made by hand, they're also more delicate than plastic play food, so these won't work for young children. It's a nice set for older kids and adults, though. 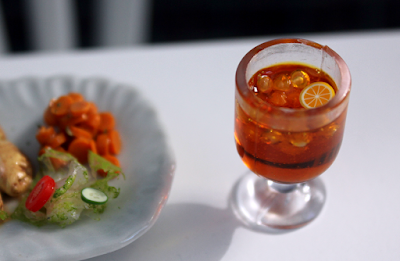 The iced tea is set in a plastic glass, but the ice cubes and lemon slices look great. 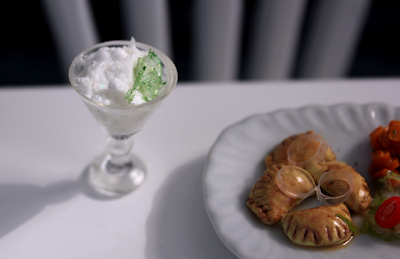 The yogurt has a sprig of mint in it. I've been calling this yogurt ever since I first laid eyes on it, but it just occurred to me that it could also be cottage cheese. Whatever you think is the yummiest, I guess.

The next collection is Our Generation doll food I got at Target. The food is from two different sets: "Love a Luau" and"R.V. Seeing You." My daughter Eva's birthday was four days ago, and she got them as gifts. They were an immediate hit! There are some things that were in the sets I didn't even get a chance to photograph, because she spirited them away to her bedroom. There was a pair of fried eggs in a pan that came with the R.V. set, and they've somehow managed to get lost already. Ah, well. 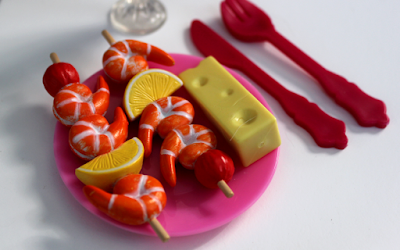 The shrimp look SO GREAT! They're from the "Love a Luau" set. Eva loves shrimp, so I had to get her this one. 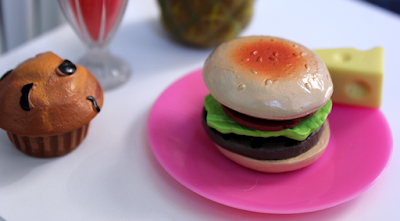 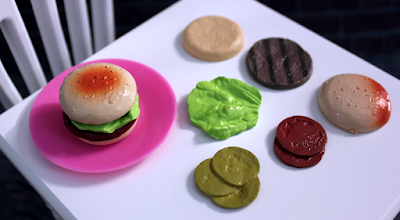 Some of the food looks good (for play food), but some is hit-or-miss. I liked this make-your-own hamburger. The individual parts of the hamburger are separate so your kid can put them together any way she wants. Whoever painted the bun on the far right apparently skipped the "how to paint hamburger buns" workshop. LOL. The bun on the left looks good, though. The tomatoes are too dark, but the detail is nice. The lettuce looks great! 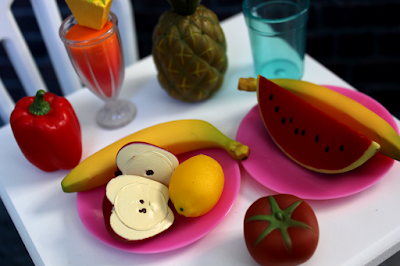 The fruit. I love that they painted the tiny seeds in the watermelon and the apple halves. I appreciate details like that. It would have been so easy for them to not bother painting those, considering the Our Generation sets are mass-produced items. 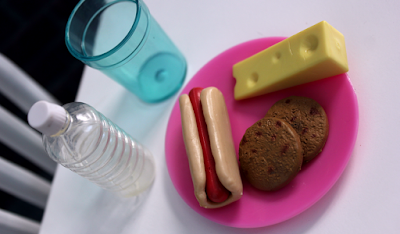 The cookies look disgusting. LOL. The sets came with pink plastic plates. It would have been nice to see plates that were a little more ornate, and you know, not pink, but it's a play set made for children. I guess I can't complain much. 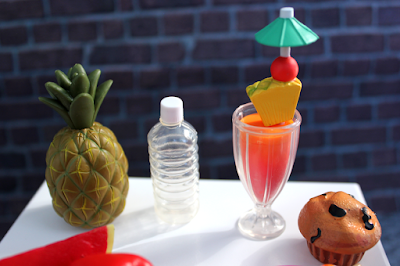 I love this tropical drink that came with the luau set! It looks suspiciously like an alcoholic drink. "It's a fruit slushie, Eva. I swear!" Very cute, though.

(Disclaimer: Chef Gina kindly sent me the pierogi set for review.  I bought the Our Generation sets at Target.)