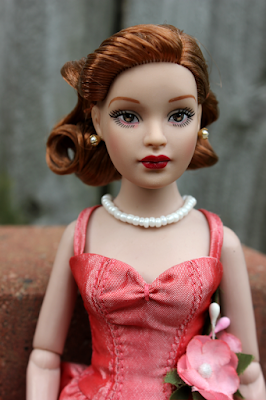 Tiny Kitty week continues now into its second week, because I have a ton more pictures to show you.  I wanted to show you more of the Tiny Kitty offerings that have come out over the past few years, because I always find it helpful to see owner pics of dolls and their clothes.  I always appreciate it when other people post live pics, so I figure I need to do my part and post live pics as well when I can.

This is Pink Champagne Supper from 2013 (above).  She sold out on the Tonner site, but is probably still available from some of their dealers.  She came out the same year as Garden Club Luncheon, which I reviewed here.   I got her last year, but never showed pictures of her here on the blog before, so here she is.  I think she's one of the prettiest of all the Tiny Kitty dolls that has come out over the past few years.  I thought I'd post some live pics. 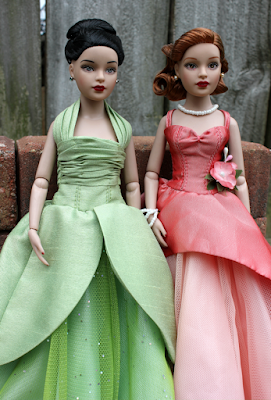 Here, Garden Club Luncheon is redressed into the green gown that came out in 2013 called "I Danced All Night."  I love the color!  It's such a beautiful shade of light green.  It makes me think of a Disney princess gown, though.  It doesn't help that the gown comes with pastel blue elbow-length gloves (instead of green or white).  It makes her look even more Disney-princess-y with the unmatching gloves on.  Still, the dress is pretty nice.  It doesn't come with undies, but it comes with some cute matching green strappy shoes.  The dress fabric seems to be silk dupioni. 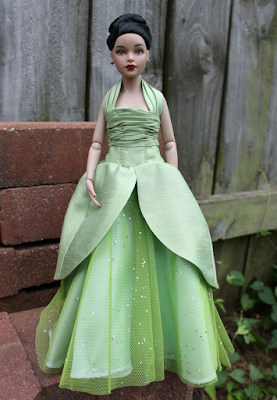 This next outfit is so Hansel and Gretel cute (in a good way).  It's called "Perfect Summer Day," and it's another from 2013.  It also doesn't come with undies.  It does come with an interesting hat that makes me think of Queen Anne's Lace (the plant that makes me sneeze every spring), and it comes with some nice white strappy sandals and wrist-length white gloves.  I love this outfit.  I had problems trying to photograph her with the hat on, though.  Every time I tried, the hat came out brilliant, blinding white, and her face looked dark.  Sigh.

Here is "Perfect Summer Day" modeled on my rerooted Tiny Kitty.  I ended up cutting her hair to just below waist-length, and I like it better now.  When it was down to her ankles, it was tangling super easily.  Like, insanely easily.  Snip-snip.  Much better now. 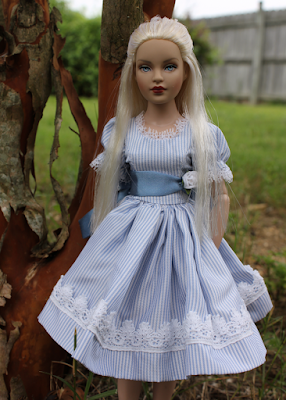 That hat.  My allergies are kicking in just looking at it. 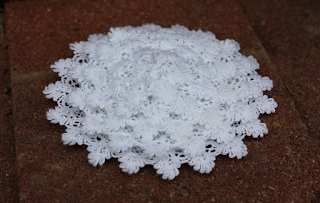 Tried to photograph her with the hat.  Nope.  Didn't work out so good.  Sorry for the craptastic picture, but this is literally the best pic I could get with the hat on. The hat has an elastic band on the underside, by the way, that you could loop under her chin if you wanted to.


The solid blue sash ends in a big bow at the back, and the whole sash is removable.  If you don't like it or prefer the dress had a simpler look, you can take the sash off. 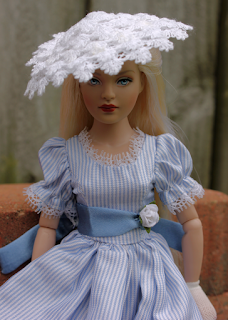