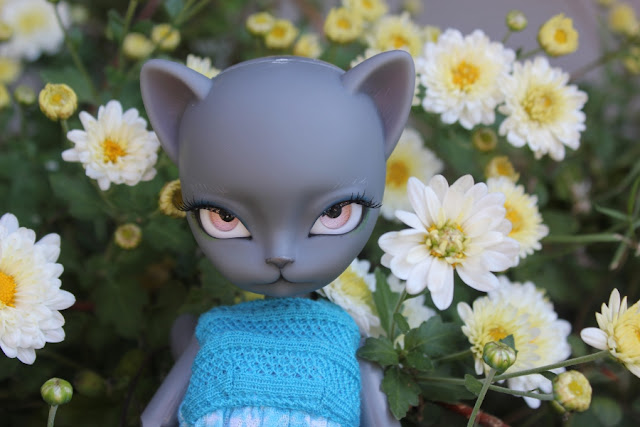 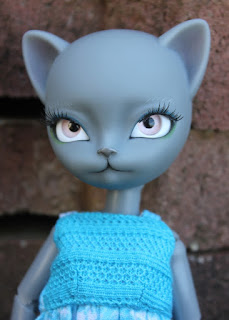 The first time I ever saw this doll I thought she was weird-looking and didn't like her, so it's really really, interesting that I actually OWN ONE now.  You see, I was never a fan of anthropomorphic dolls.  Really, the closest I ever came to liking anthros was my deep childhood love for Bugs Bunny.  Hee hee.

So ... I began noticing these cat dolls on the Junky Spot Facebook page, and they seemed to be really popular.  They kept selling out.  I was fascinated by them, but didn't actually love them at first.  The fascination continued over a couple of months, and they steadily grew on me.  I was converted over time from thinking they were a little too odd for me, to squeeeing over their cuteness.  (How many "E"s does the word "squeeeing" have?)  Admit it: Cat faces are cute.  Cat paws are cute, too.  Cat tails are cute.

I kind of wish they'd had a rounder, more cartoonish body.  They use the same female body as many of the other Hujoo dolls (the ones with human heads, I mean), but with cat feet and paws, and a tail.  They're 23cm/9" tall. 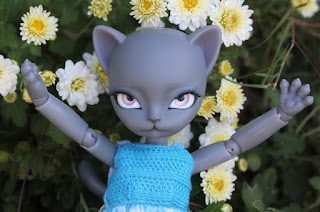 They are made of ABS plastic, not resin, but other than that, they fit the description of an Asian ball-jointed doll in every way.  Their eyes are changeable.  They can sit up nicely and stand on their own.  Their posing is fairly good, but with some limitations.  I think they should have had better movement in their head and wrists.  You can move their heads up and down, side-to-side, BUT ... and this is a big BUT ... you can only move their heads side-to-side if it's in the "down" position.  If the head is in the "up" position, for some reason you can't move it from side-to-side any longer.  Weird.  If you raise their arms in the air, the arms do stay in position without falling, which is nice. 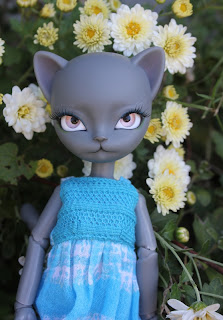 They come with a vinyl insert that you can put in their heads to keep their eyes in place without the use of putty.  It actually works really nicely!  The only problem with it is it forces the eyes in a "forward" position, so if you want upturned eyes like mine has, or side-glancing eyes, you're going to have to use putty anyway.  If all you want are forward-glancing eyes, then the vinyl insert works like a charm.  (I only tried it with half-round eyes, by the way.)

They come unpainted, with no eyes as a do-it-yourself dolly kit.  (They DO come already strung, though.)  You have to buy the eyes separately (size 16mm).  The first production run of these dolls had an issue with the pegs in the head plate not fitting properly.  You had to sand the pegs down a bit to get them to fit right.  Mine was first production run, and she didn't really require a lot of sanding.  I found that some plain old sandpaper did the trick quite nicely, and didn't take a lot of time.

Anyway, they're only available at one store right now:  The Junky Spot in California, USA.  Although they're produced by Hujoo, they are an exclusive to just that one store.  (The store's owner co-designed them with Hujoo.)  ... No, I don't get anything for promoting the doll or the store (I never do), but since I bothered to do a review of them, I thought I might as well tell you where you could get them.

By the way, in case someone is interested:  I did my faceup with acrylic paint (nose, black eyeliner and mouth lines) and oil-free watercolor pencil (everything else).  The eyes are 16mm glass Soom eyes.