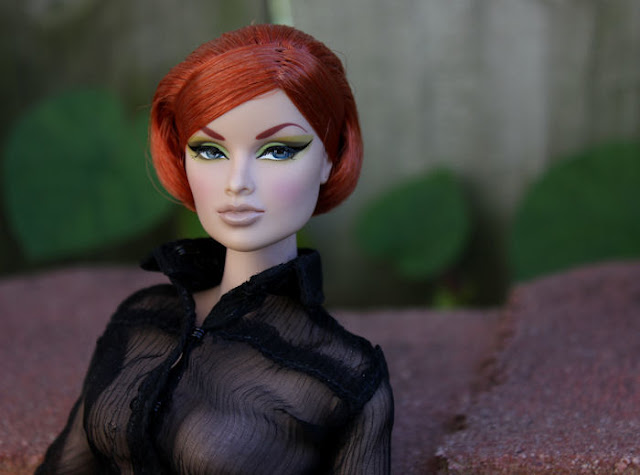 "Regal Solstice" Anja has got to be one of the best looking wonky-eyed dolls I've ever seen.  Usually wonky eye paint on dolls drives me crazy.  For me, it's all about the eyes, baby.  ... And this Anja has one eye that's slightly bigger than the other, Sinead O'Connor-style.  I know it's not just my doll, too ... every RS Anja I've seen has this same flaw.  Usually that would drive me mad.   To me, the eyes are the best part of the doll and eyes that are painted/screened wrong spoil the doll.  Here's the weird part, though:  I'm totally in love with "Regal Solstice" and she's become one of my favorite Fashion Royalty dolls.  For some reason, the eyes work on her.

It took me a while to figure out WHY they work. 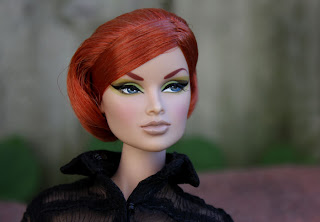 It's because she has such a wonderful facial expression.  She has just a hint of a smile, and she actually looks like she's thinking.  When a doll's eyes are painted so that it actually looks like it has an intelligence, that's the hallmark of a very talented doll artist.  In this case, Anja was a factory-made doll and therefore the eyes were done by a screening process, which means it was a darn good screening despite the flaw.  There's something about the eyes that's kind of sultry and self-confident, yet gentle.  She doesn't have that blank-faced look that some dolls have.  Don't get me started on blank-faced dolls; I can't stand them.  Dolls have to have some personality to interest me, and Anja does.

I was doing searches for other incarnations of the Anja sculpt ... The Dark Hunter "Simi" doll, the Carol Roth doll, and the Integrity convention exclusive "Provocatice" Anja ... and only "Provocatrice" shared the wonky eye screening.  All of this sculpt's incarnations showed a great deal of character.  It just proves to me that it's a sculpt Integrity needs to use more often  ... although perhaps they can tweak the screening a bit on the left-glancing dolls like "Solstice."

The angle on the last pic best shows the subtle difference in eye sizes.  It's not her best angle, but she's still a nice-looking doll. Click on the picture to see it larger.

"Regal Solstice" Anja was a W Club exclusive from Integrity Toys from 2010.
Posted by Me at 6:15 PM